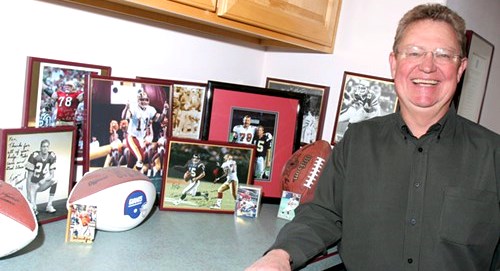 Mourning the Loss of “one of Missoula’s own” and Montana Fishing Reports: Captain’s Column
By angelamontana

Missoula received some sad news on Saturday when word spread that Ken Staninger had passed away. Staninger had been battling cancer for a few months–he was 63. Over the years, I would receive a call maybe twice a year from Ken, “When you gonna take me walleye fishing,” he would say. We always ended our conversation with a pledge that we would make a walleye trip happen, but it never did.  Ken was always busy with his real estate business or NFL agent business, so it was hard to make our schedules work so we could get together for a couple of days of walleye fishing.

One time, he called me to find out how the whitefish were doing on Flathead Lake, a few years back, when one of his kids were getting married. With his busy schedule I don’t know how much fishing Ken actually did but it was always fun for me to talk to him whether I was seeking real estate advice or I was telling him about one of my recent fishing trips. Ken was definitely one of Missoula’s own and he will be missed.

Fishing reports have been pretty good recently. “Last Saturday three of us went fishing over at Holter Reservoir and we pretty much limited out on trout”, said Jim Johnson from Lincoln. Johnson was fishing in 12 to 16.2 feet of water through the ice about a foot off the bottom. “I have been fishing this spot for the past 30 years on Holter in Lincoln Bay and most times I do pretty well,” added Johnson, “we used eggs sacks, worms, and red and white maggots with the maggots catching most of the fish”. The ice is about 14 inches thick.

Dick Zimmer from Pablo had this to say in an e-mail on Monday: “Last Wednesday and Thursday, January 23rd and 24th my friend Steve Speckert and I made the trek to McGregor Lake to sample some early ice mackinaw fishing.  We weren’t disappointed.  Between the two of us we figured we hooked and landed near 80 lakers.  We used mixtures of chartreuse and white glow colored Glo Grub heads and Tube Jigs along with Mac flies also in the two colors and were happy with the results. I used a 1//4 oz all glow 2” tube jig.  It was slow getting it down in the 190 to 200 foot depth in which we were fishing but as with all soft baits the fish have a tendency to hold and devour it more readily than a hard bait.  I believe that during the “McGregor Lake Mackinaw Tournament, February 9th and 10th this will be my bait of choice for targeting the larger fish.

Last week I had some successful perch fishing in depths near 30 feet using a 2 inch chartreuse glow crappie tube on Lake Mary Ronan. Early morning and night time have been best at Lake Mary Ronan for many limits of kokanee.  Submersible lights have benefited night time fishermen though they’re not a necessity.

Chartreuse colored jigs have been the best at Pablo Reservoir which has also been giving up nice catches of perch.

East Bay on Flathead Lake continues to produce good catches of Lake Trout and perch.  Whole fish, big tube jigs or sausage being best for lake trout while a 1/8 glow Double Whammy Trilobite will bring in the big perch”.