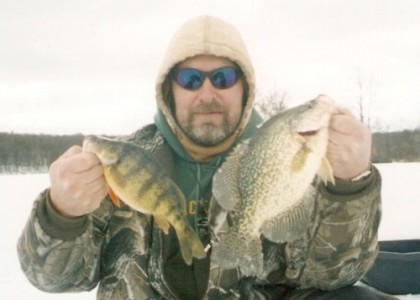 Chancy from Snappy’s
Chancy at Snappy’s says the ice fishing is on. Lake Mary Ronan’s got about 5 inches of ice and reports on perch, but discourages snowmobiles use just yet. Lake 5 is doing well using the new access catching kokannee, perch, and rainbows. Blanchard Lake 4-5 inches of ice on it, croppy at night and the occasional pike and perch during the day. Hubbard has a lot of nice ice on it, lots of rainbows and kokannee, upper Thomson 3-4 inches kicking up quite a few smaller perch and pike, Rodgers Lake fishing pretty good for grayling and cut throat down. McWinneger Slough just part Snappy’s to the East few out night fishing for crappie, perch and pike, Bitterroot sounds like its still pretty well open, McGregor during the week’s been wide open, The Middle Thomson had a few reports come in last week on perch for those walking.

Leonard from Roberts Bait and Tackle
Leonard from Robert’s Bait and Tackle says lots of snow and ice out there. Holter’s has 8 inches, Nylon and Willow Creek have over 10 inches, Bynum has over 20 inches, Francis has 12-14, on Tiber 10-12 inches, Fresno has 8-14 inches, Baileys has 11 inches, Beaver Creek has over 8 inches, Arod 10-16, Newland have 10, Ackley has 11, and Piscan has over 10 inches. Fishing wise, doing well out of Bynum, and Tiber’s been producing 10-25lbs Northern’s. Fresno’s been doing well on walleye’s with salted minows, Beaver Creek had reports of some nice perch, Arod some nice trout of there, Newland has been producing ling. The rivers have been producing in the open waters, and Leonard reminds us of the Willow Creek Derby January 26th. If you have any questions or need rod & reel repair call Leonard 406-454-1877.