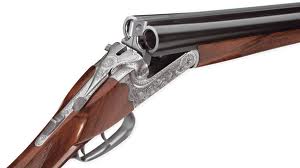 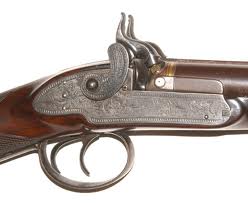 The hunting sport of wing shooting or “shooting flying” began in the 1600’s after the French developed the flintlock action. In the following years, all over Europe, flintlock ignition, muzzle loading “fowling pieces” developed slowly. The development of the double barrel side by side muzzle loaded shotgun reached its zenith when in 1793, Joseph Manton set up his shop in London England. Manton’s guns were light, trim, and well-balanced. The stocks had graceful curves, tasteful engraving, and set the standard for elegance and perfection that is still respected and copied by today’s modern manufacturers. Some of London’s future great shotgun makers, including James Purdy and William Boss served apprenticeships under the tutelage of Joseph Manton. 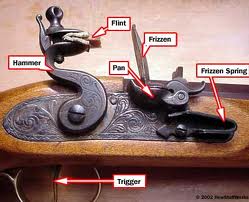 In 1807, Scotsman Alexander Forsyth patented the percussion cap ignition system and in little time this more efficient system replaced the flintlocks. Ongoing technical development of the percussion muzzle loading shotgun reached its acme in the mid-19th century. In the 1860’s, the breach loading, external hammer shotgun was designed. James Purdy & Sons, Boss, Westley Richards & Co., Holland & Holland, E.J. Churchill, and John Rigby are just some of the manufacturers that refined what we now recognize as the classic English double gun. Collectively they were responsible for the breach loading, external hammer, sidelock shotgun that had low rebounding hammers, underbolts that locked the gun closed and the top release lever. These fully developed hammer guns were produced until the outbreak of World War I; some external hammer guns are still produced today.

In the last 20 years of the 19th century, hammerless (actually internal hammer) shotguns appeared on the scene. British gun makers used the motion of opening the guns to cock the hammers and developed new, safer sears, automatic ejectors, and eventually single selective triggers. At the time not everyone accepted these “new-fangled” guns. In fact, King George V, one of the great game shots of the time, commented that a shotgun without hammers “looks like a spaniel without ears.”

Hammerless boxlock and sidelock actions perfected by the great British gun makers of yore are still the basis of today’s modern SxS and OU shotguns. Next week we’ll look more closely at some of these great guns and their actions designs.

Until then, be safe and good shooting. 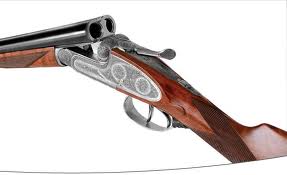