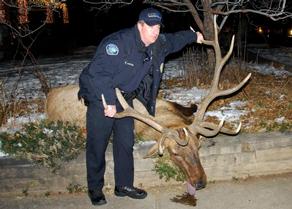 Vigil Held for Deceased Elk in Boulder, Colorado
By angelamontana

After checking out one of my favorite local online hotspots, the 96.3 The Blaze website (www.963theblaze.com), I did a double-take on the title of an article that read “Boulder, Colorado Neighborhood Holds Vigil for Dead Elk”.  What?  I HAD to find out what this was all about, so after further investigation, the story proved to be one of a kind.

It turns out, almost 200 people from Boulder, Colorado held a vigil for a recently deceased bull elk that frequented their neighborhood regularly.

According to the article, an on-duty police officer had seen the elk wandering around the area and shot and killed it.  The neighborhood residents were appalled and devastated, therefore holding a vigil for the neighborhood mascot.

The officer claimed the elk appeared injured before he shot it and has since been “placed on leave”.  He and another officer are under currently under investigation for the fatal elk shooting.