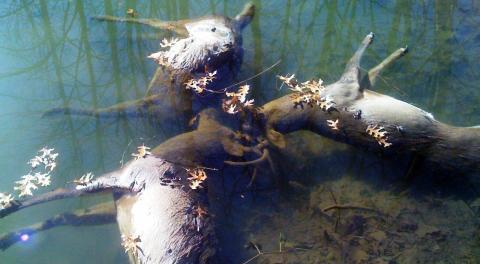 “It’s No Bambi Story”: The Triple Buck Tragedy
By angelamontana

According to an article posted on the Field and Stream website, somebody in Ohio found something quite peculiar.  You may have heard stories of two bucks locked together, or you may have even found a pair or two in your life.  Two bucks is a rarity in itself, but three?  I didn’t want to leave anything out, so the entire Field and Stream article is posted below.

Check out this bizarre story:

Forester Jason Good was surveying timber in Meigs County , Ohio , on November 12 when he stumbled upon a bizarre sight that made the hair on the back of his neck stand up: In a waist-deep pool of Leading Creek, nose-to-nose like fish on a stringer, floated three whitetail deer.

The experienced woodsman needed a few minutes to puzzle out exactly what he was seeing—a trio of mature bucks that had locked horns in a battle to the death, illustrating, in the starkest terms, the potential ferocity and brutality of the whitetail rut.

Good spotted the deer from a distance and, at first, thought it was a single carcass.”It was close to the road, and I figured somebody had poached a deer,” he recalls. Even after a second look revealed two deer, he was about to walk away.

“I see dead deer in the woods all the time,” explains Good, who measures timber for a lumber company.”I almost ignored it until I looked again and saw it was three deer.” 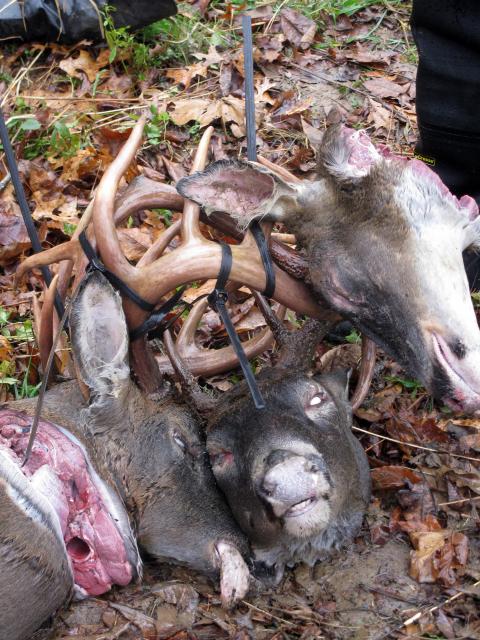 From the creek bank he realized he’d found “something -special” – not just three deer, but three bucks that appeared to have locked antlers.

“I sat there 20 minutes just looking at them, totally amazed, and it took that long to sink in what I was looking at,” Good says. “I thought, ‘If this is really what I think this is then I cannot screw this up.’ I wanted to make sure everything was done by the book so the landowner got to keep these horns.”

Good called the landowner, Brien Burke.
“He said,’Brien,I’ve found something on your property I’ve never seen before, and you’ve got to see it,'” Burke recalls.”I’m thinking a murder, a meth lab, who knows? I said, ‘Jason, just tell me what it is.’ He says, ‘It’s three bucks locked up and they’re floating dead in your creek.'”

Burke couldn’t believe it. “I could see two, but three? I asked if he was sure and he said, ‘Yes.’ I drove down and met him. They were floating in the creek almost like three petals of a flower or something.”

He reached out to an old college buddy who worked for the Ohio Department of Natural Resources. He advised Burke not to touch the deer and put him in contact with Joshua Shields, the ODNR conservation officer for Meigs County .. Shields was too busy to examine the scene until the following Monday. “It was the peak of the rut, and I knew there’d be a lot of hunters in the field,” Burke says.

He kept the find quiet and maintained a close eye on his property until Monday rolled around.

On Monday, Burke assembled his salvage team at the site, a farm where he and his father built a hunting lodge in 1974 and where they’ve hunted ever since.  After examining the scene, which included extensive evidence of the ]bucks’ battle royale, Officer Shields determined the find was legit, and the salvage operation began.

The best way to untangle the pileup, Burke and Shields decided, was to sever the heads of two of the deer and remove their bodies; then the third deer would be removed intact, with the racks of the first two bucks still locked in its antlers.

“All three of the bodies were 200 pounds plus,” Burke says.”No way were we going to move them all together, and my top priority was to preserve the integrity of the lock.”

Burke’s friend Chris Davis waded into the water and zip-tied the antlers together as a precaution.

Davis prepared to begin sawing as Burke and Shields watched.

After removing the bodies of the first two deer, Burke and Shields (joined by logger Bobby Thompson, left, and forester Jason Good, right) waited for Davis to pull the last buck-with the heads of its rivals still attached-from the creek.

As Davis lifted the mass of horns above the water, the crew got their first inkling of just how remarkable a find this was.

“I knew it was something special, but I don’t think any of us knew how special until we lifted them out of the water,” Good says. “It was hard to judge the racks all tangled up under water; I thought they were three scrawny deer locked together. When they came up out of the water it made the hair on back of my neck stand up again. Holy cow!”

The combatants turned out to be an 11-pointer, a 10-pointer and a 7-pointer with an eighth broken tine.

Official Boone & Crockett scorer Jack Satterfield took on the daunting task of putting together a green score for the three intertwined racks. All together they tallied more than 400 inches of bone.

So what happened? Burke, who has probably spent more time than anyone poring over the puzzle of intertwined beams and tines, has a theory.

“Looking at the horns, it looks like the 7- and the 11-pointer were battling and only one side of their horns were locked,” he says. “Then the 10-pointer came in on the opposite side, and his main beam went around the base of each one of the other two deer’s antlers and his tines went up on the inside of their beams and locked them all three together.”
Damage to the creek bank and gouge marks on trees suggest the bucks locked up 50 yards downstream, then struggled together along the bank-half in and half out of the shallow water-until one of the bucks toppled into the deep hole where the deer were found

“I think one deer hit that hole and pulled the other deer into the water and they all drowned together,” Burke says. “Drowning was probably a good thing. The coyotes would have been on them in no time. I imagine they died full force, adrenaline flowing, battling it out.”

“But there’s also a certain sadness that the lives of three nice bucks just ended like that. Three deer that any hunter would have put on the wall and told stories about.”

A find at once so gruesome and awe-inspiring provokes the imagination of even the most objective wildlife observers. It vividly illustrates the intensity of the drive behind the whitetail rut, and reminds us just how high are the stakes, how intense the drive to breed for mature bucks.

Wildlife biologists are taught that anthropomorphism-endowing the animals they study with human qualities-is not good science. Yet, says Mike Tonkovich, deer project leader for the Ohio Department of Natural Resources, “I can’t help wondering what was that third buck thinking? Whatever possessed him to get engaged when the two were already entangled?”
It’s a thought that Burke echoes. “Three alpha bucks coming together at once, I just can’t imagine how brutal that must have been,” he says.

“It’s kind of neat to see evolution right there in front of you,” says Tonkovich. “This is Darwin stuff, what we learned in biology 101-those that are strongest and smartest will do the breeding. In today’s deer management world, our interest is in population dynamics or growing big bucks and age structures and so forth, but this takes you back to the basics of deer behavior and, even more simply, evolution and Darwin’s theory of natural selection.

“What you’re seeing here is one buck trying to convince another that I need to pass my genes on and I’m gonna do what it takes to make sure it happens. This is a manifestation of that drive.”

“They didn’t plan this very well, that’s for sure,” the biologist notes. “But that also adds some realism to the whole thing-that in spite of the sophistication of evolution there are hiccups that cause the system to fall apart.”

“I guess it shows us how brutal Mother Nature can be,” says Burke “It’s no Bambi story.”

Click HERE for the original article from the Field and Stream website and to see more pictures from this story.