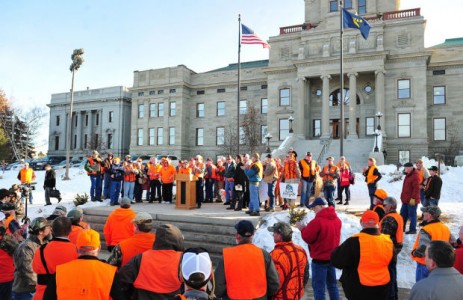 It may not seem like an issue that really effects outdoorsman, But surprisingly it is. Crossing a corner post that connects one piece of public land to another, but surrounded by private property. IT’S ILLEGAL! Even though your feet may not touch the ground on private, you are still trespassing. This has angered a lot of sportsmen in the state, because it is keeping us from accessing public property that taxpayers should be able to access.

HELENA – The Montana House on Monday rejected a plan that aimed to give hunters and others access at “corner crossings” to public land that is intermingled with private land in a checkerboard pattern.

Hunters and advocacy groups packed the chamber in support of the measure, seeking access to patches of government land that meet at corners. Supporters of House Bill 235 said denying access at such corners ensures that mega-land owners like Ted Turner can lock up blocks of public land.

Hill said the measure would ensure access to more than 800,000 acres of landlocked public parcels.

Backers, led by Democrats, were trying to get the measure out of a committee where it had been tabled. Republicans used their majority in the chamber to easily defeat that motion. It only received 45 votes, instead of support from 60 out of 100 in the chamber needed to meet a procedural threshold.

Republican critics argued there is no way to cross at the corners without trespassing, even if a person knows exactly where the property lines intersect. They argued a person’s hips and shoulders would cross the airspace at the intersection of the four corners while hopping between parcels.

“It is not about playing hopscotch, it is about trespassing across private property,” said Rep. Jeffrey Wellborn, R-Dillon.

Wellborn said other measures are needed that can be supported by both hunters and landowners.

Republicans instead advanced a bill that puts more money into the Block Management Program that pays landowners for hunter access. They said House Bill 404, carried by Rep. Kelly Flynn of Townsend, is one of several measures in the works to improve hunter access.

Democrats argued it wrongly takes the money from a habitat program and said that payments to Montana farmers won’t help gain access to land they argue is mostly locked up in private hunting preserves for the wealthy.

Advocacy and hunting groups coordinated a rally Monday to coincide with the move on the House floor to blast the corner crossing bill out of committee. They were not impressed with the alternate proposal that paid some landowners for access to farmland, which they argued is not generally prime hunting habitat.

Bill Berg of Lewistown, with the Russell Country Sportsmen, said jumping over an intersection of land at the corners isn’t trespass any more than an airplane that flies over.

The advocates promised to keep pushing the issue.

“This corner crossing problem is not going to go away. It needs to be addressed,” Berg said.