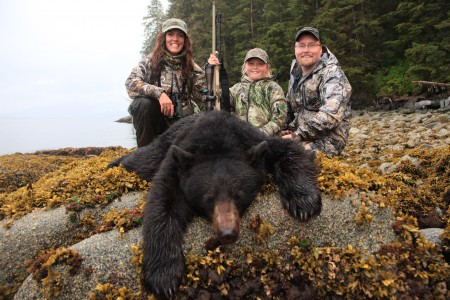 With Taylor’s Dad being a long-time hunting guide and taxidermist in Montana, Taylor is no stranger to what is involved in hunting and to what it takes to be a successful hunter, as she has been going on hunts with her Dad since before she could walk.  But, she has never been the “hunter” until now.

Jim described the moment they spotted “Taylor’s” bear, stating that the bear had not given Taylor much of a chance for a shot at him, and he wandered back into the woods, following a sow.  But, to their surprise, the bear turned back around and decided to set Taylor up with the perfect shot.  He stopped to graze on some grass just 168 yards broadside, and Taylor pulled the trigger.

Jim recalled, “I hit the record button once again and waited nervously. Just then the rifle went off. The bear spun 360 degrees and darted off towards the dark timber. Just as he was about to enter  “no mans land” the bear fell just short expiring in seconds. ‘I got him…he’s down!’  Taylor said as she stood and turned to hug her dad.”

I know a few people from the Bitterroot area where Taylor is from, and it is always awesome to see people, especially locals, get opportunities like this.  Congratulations, Taylor!  Awesome bear!