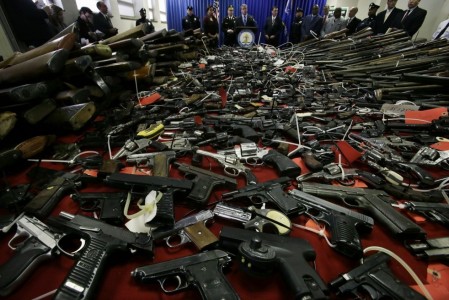 #1.) Cold medicine. To get cold medicines containing pseudoephedrine, you have to show ID and get entered in a database. Otherwise the government thinks you’re going to buy a case of Sudafed and turn it into a big batch of METH.

To buy a gun from a licensed dealer, the federal government requires a background check and a waiting period. But for a PRIVATE purchase, you hand over the cash and walk away with a gun.

The Gun Control Act of 1968 says a licensed dealer can’t sell handguns or ammunition to someone under 21. But it doesn’t say anything about shotguns or rifles. And an 18-year-old can still buy a handgun from a private seller, like any other adult.

#3.) A wireless contract. You need to pass a credit check to sign a cell phone contract. Buying a gun doesn’t require one.

#4.) A puppy. To adopt a pet, you have to be at least 21, with government ID and proof of address. They’ll probably ask you for personal references . . . and some places even require a HOME VISIT from one of their staff members.

States require a Social Security number to get a fishing license, because they’re now allowed to DENY fishing licenses to people who are behind on child support. Yes, there are Americans out there who put fishing ahead of feeding their kids.

Anyway, wherever you stand on this, there’s always a bright side. If you think the U.S. is TERRIBLE at gun control . . . at least we make up for it with Sudafed control.

And if you think we’re too STRICT on gun control . . . just be glad you don’t live anywhere else.