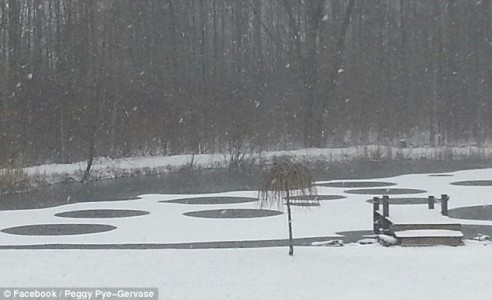 Aliens or Freak of Nature? Perfect Circles Found in Pond
By Kamp Cook

We have all heard of crop circles, but have you heard of pond circles? People believe that crop circles are created by aliens, but what could cause mysterious perfect circles on ponds in New York?

According to Yahoo news

Peggy Gervase of Eden, New York spotted an unusual sight in her backyard that she had never witnessed before. Gervase told WGRZ 2 On Your Side that she saw perfect circles in the snow on the surface of a nearby pond. “I’ve never seen this before in our pond…It’s eerie in a way and it’s cool in a way,” Gervase said. Mystified by the odd formations, which resembled crop circles, Gervase snapped several photos and posted them on Facebook looking for an explanation. A link on the WGRZ Facebook page brought comments with varying theories from meteorites to aliens to gaseous ducks and fish.