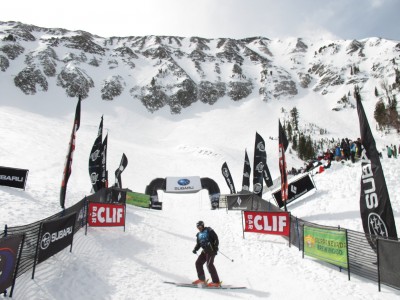 Come on and Take a Freeride: Brett French Radio Show Preview
By angelamontana

If you want to see some insane skiing, dramatic jumps and spine-twisting falls, then watch freeride skiers when they compete. I had a chance last week when freeride skiers competed at Moonlight Basin in the Subaru Freeride Series. The men and women were skiing down the steep, rocky Headwaters bowl on the mountain that abuts Big Sky Resort. The skiers can take any route down the mountain within a prescribed area and are then judged on their finesse, style, fluidity and chutzpah – another way of saying their ability to place their bodies at risk with a bit of flourish.

Back in the day, I had friends who skied like this without any competition or possibility of monetary reward except maybe a cold beer at the St. Bernard. We thought they were crazy, but cool, as they hurtled themselves off high rock cliffs and over ledges into deep snow. Now it’s a sport, demonstrating how extreme everything has gotten in this day and age.

To read more about the freeride skiing competition, see my story on The Billings Gazette website: http://billingsgazette.com/lifestyles/recreation/