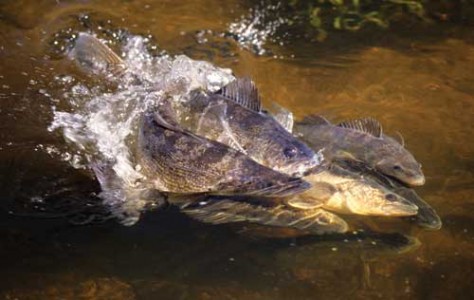 Montana Fish, Wildlife and Parks will host a public meeting to answer questions about the Draft Environmental Assessment to Investigate Suppression of Walleye in Noxon Reservoir.  The open house style meeting will be held from 4:00 pm to 7:00 pm on March19, 2013 at the Thompson Falls Rural Fire Department on highway 200.  Interested persons are welcome to arrive at any time during this session.  Verbal comment will not be collected at the meeting; however, the public will be encouraged to submit written comment.

Participants are encouraged to read the EA at the following website (within FWP’s website, fwp.mt.gov) location prior to the meeting:

Investigation of Suppression of Walleye in Noxon Rapids Reservoir

You may also submit comments by email at the above site.

*  Walleye were illegally introduced. MFWP’s Illegal and Unauthorized Introduction of Aquatic Wildlife policy states the department will investigate the feasibility of removal and control measures on illegal population The FWP Commission Walleye Stocking policy states “No introduction of walleye will be made into waters of the state west of the Continental Divide”.

*  Based on case histories from other western reservoirs, walleye in Noxon Reservoir pose a significant threat to desirable sport and native fish including largemouth and smallmouth bass, yellow perch, and numerous trout species in Noxon Reservoir due to reproductive capacity (up to 600,000 eggs per female) and habitat overlap.  Walleye flushing downstream also pose a threat to the Lake Pend Oreille kokanee and rainbow fishery.