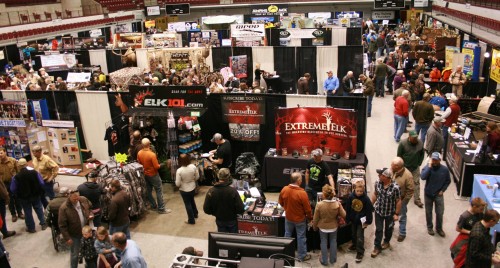 The Great Rockies Sports Show was well received in Missoula this week. Montana Outdoor Radio Show booth was popular as ever and we loved seeing all of you at the show!

This week at montanaoutdoor.com we had record interest in a story on a record bull found stuck in the mud on public land and helped free only to be found dead. If you haven’t already seen the story you can find it HERE.

Fish Wildlife and Parks reported between 50,000 to 100,000 of the white birds appearing at the Freezout Wildlife Management Area in just the last week. The birds are flying north to breeding grounds. If you are interested in seeing this natural spectacle you can click here for updates and read our post HERE.

Kamp Cook shared a viral internet video on a deer that was thought to be dead, only to surprise Highway Patrol when they opened the trunk of a car it was being stored in. Witness this crazy video HERE.

Ice is still holding according to Chancy at Snappy’s but ice fishing on Bitterroot Lake is limiting on salmon, and use caution from the shoreline.  Ashley & Beaver Lakes are doing well for kokannee.  Island Lake still catching small pike and a lot of perch in the 7-11 inch range.  Kevin from Snappy’s was up on Blanchard noting some nice crappy, and the ice was holding well up there.  Getting good reports from the south end by the bays and narrows.  East bay perch should be showing up on the Flathead these next few weeks as the fish move into shallow water.  Over on the east side there were reports of big rainbows.

Fishing has been really good on the Bighole using a double dropper nymph with a stone fly and prince.  Folks have been doing well for rainbows on the Bighole as well as some nice browns.

Angie at Bob Wards says the Helena Holding Reservoir is still holding ice and providing good kokanee fishing, and the Bozeman area fish are high maintenance and treated with a touch of indulgence. Reports that squala hatch on the Bitterroot have started.

Congratulations to Kessler Leonard of Great Falls and Thomas Stahl of Stanford!  They were the latest winners on statewide trivia sponsored by Placer Motors in Helena! Aaron Hedges of Missoula was our Montana Club Ski Pass winner! Be sure to tune in to the Montana Outdoor RADIO SHOW for your chance to win every Saturday morning!