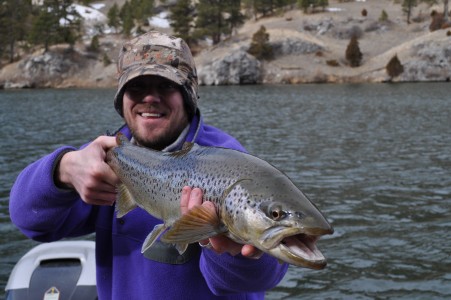 Hear where the fish are biting in the Great Falls, Dillon and Kalispell areas.

Chancy from Snappy’s
Chancy at Snappy’s says the fishing is still doing pretty well in the area. Folks getting out on Flathead Lake and doing well getting some nice trout on the delta off the bottom, 10-20ft of water with bait fish. Trolling from Westshore State Park using flatfish and doing pretty well on trout.  Summer’s Bay for laker’s and whitefish. Smith Lake kind of a slow but what you get is pretty nice.  Island Lake producing perch 8-11 inches and some smaller pike.  Still pretty god ice on the Lower Stillwater catching some nice perch in the 9-12 inch range.  Bitterroot Lake getting reports on salmon in the South end in about 60ft of water and catching limits on some smaller kokannee, and in the larger ones are deeper in about 240 ft of water.  Rumor has it someone caught a 7 pounder last week. Upper Thomson’s getting some salmon, perch, and some smaller pike.

Leonard from Roberts Bait and Tackle
Leonard from Robert’s Bait and Tackle says Holter’s getting boats in down by the gates, and getting down as far as cottonwood. Piscan has opened up, Willow Creek and Bynum also. The ice is rotten on Francis and Tiber, Fresno’s there still ice fishing as well as Nelson. The river’s are open all over for anglers. If you have any questions or need rod & reel repair call Leonard 406-454-1877.
Shelby from Rocky Mountain Supply in Dillon

Shelby from Rocky Mountain Supply in Dillon says the ice on Clark Canyon getting pretty soft, but the ling fishing has really turned on using McFadden Ling jigs also jigging with a little piece of nightcrawler is good.  On The Beaverhead River and Big Hole, woolybugger, zonkers, and san juan flies with a bead are working well. If you’re in the Dillon area, stop into Rocky Mountain Supply for more information or call 406-683-2308.