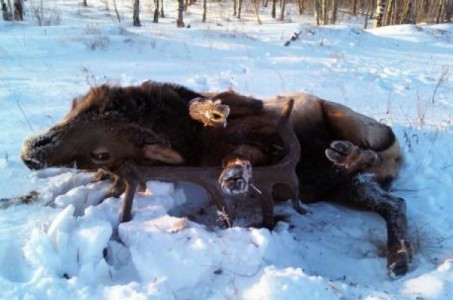 I was recently forwarded a story about a record bull that was found with his antlers stuck in the mud.  This is not just a typical story.  It happens to be about, what ended up being, a record non-typical bull.  The THIRD LARGEST IN THE WORLD!  Check out this bizarre story…

Ryan Muirhead went out deer hunting on state land with a couple of buddies on the last day of Minnesota’s muzzleloader season and came across an unusual sight as the group drove around a corner.  A huge bull elk appeared to be “pinned” on his back, because his antlers were stuck in the mud.   Muirhead recalled that the bull’s chest was heaving, and it seemed as if he had been there for a while — he seemed exhausted. 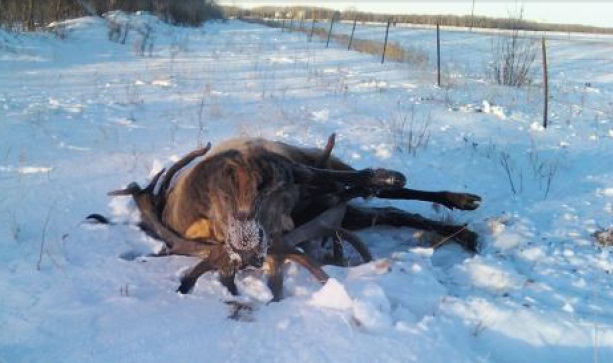 Somehow, the big bull had managed to get stuck like a turtle on its back, wedging his rack deep into the mud and snow.  The hunters were not sure what to do next, so they decided to ask a nearby rancher to use a 2×4 to try and wedge the giant animal out from how he was stuck, as they didn’t want to see his life end like this. 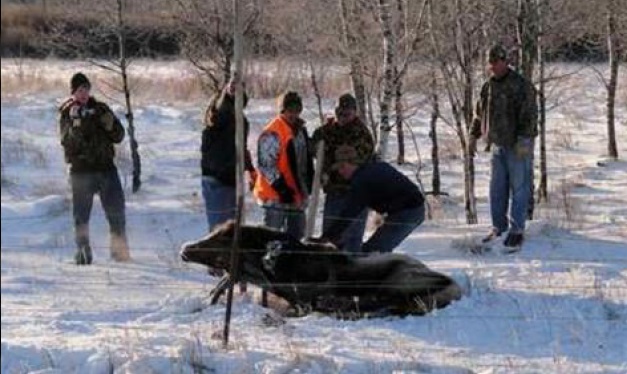 “It took a few minutes, but we finally got him three-quarters of the way turned and he flopped over and staggered off. You could see by the holes in the ground how his antlers had been dug down in the mud 8 to 10 inches”, Muirhead said.  Unfortunately, the bull didn’t get very far before he collapsed near a fence.  Apparently, he had been kicking so hard and for so long that his back leg was bloody from hitting his antler, and his breathing was labored.

The bull eventually got up and, still wobbly, headed toward the woods.  The group of hunters just stood there “in awe” of what they had just witnessed and been a part of.  The group ended up going on their evening deer hunt, and the bull became a distant memory…except not for Muirhead.

He was certain the bull wouldn’t get very far, so he returned the next day with his wife and found the bull not even 600 yards from where they had freed him the day before.  Sadly, he appeared to have pneumonia, as he was coughing and wheezing and didn’t even pick his head up to look at them until they were within 40 yards of him. It looked like he had dragged himself about 25 yards to the willows before laying down in the snow. 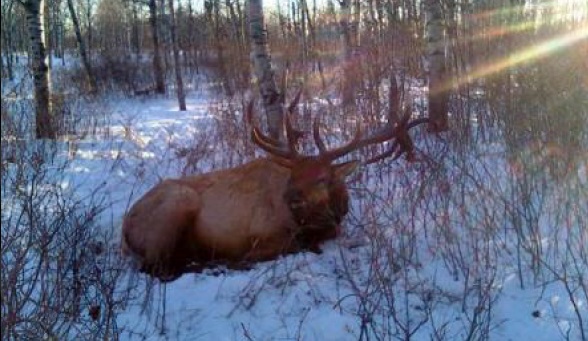 Being fully aware that the bull was on state land, and his best chance of claiming the rack was to be there when the animal died, he took his wife home and went back and watched the elk from a distance for approximately six hours.  Muirhead recalled, “It was sad to see a wild animal like that not be able to get up and run and do what he wanted to do. He’d pick up his head every now and then, but he could barely lift that rack. And finally he just stopped picking up his head. To stand there and watch him die, it was tough. It’s tough to see.”

After the bull had died, Muirhead contacted the Minnesota DNR, and a necropsy revealed puncture marks caused by a broken rib.  They suspect his drop tines caused the damage that led to his death.  Biologists removed a tooth for aging, and they estimate the bull was 8-10 years or more, but the results are still pending.

The rack green-scored 475 5/8 gross, with a net of 456 4/8 on the Boone & Crockett scale. An updated score will be forthcoming after the 60-day drying period, and a special judging panel convening in 2013 would need to weigh in before anything becomes official. But based on the green score alone, the elk ranks as the third largest nontypical in the world and the largest ever in Minnesota.

It just so happened that the area they found the bull was illegal for elk hunting, too, so this was the only way a person could possess any elk from this area legally.  Although nobody is certain as to how the elk became stuck on his back, some suspect that he was with a herd that had been spotted coming though the area a couple of hours before Muirhead and his group came through, and he jumped the fence, tripped and, tragically, got stuck–but, nobody really knows how it happened. 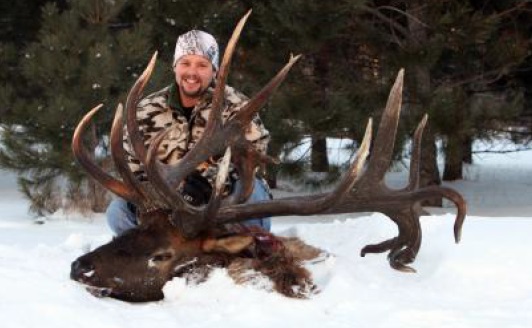 The record rack will be displayed underneath Muirhead’s 22-foot cathedral ceiling.  Quite the story, eh?