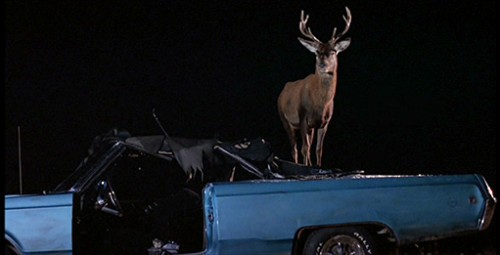 You know the scene off of Tommy Boy, when they hit the deer and then cry and put it’s body in the backseat? Well, picture that happening in real life. It did recently in Kalamazoo, Michigan.

Early Tuesday morning, police in Kalamazoo, Michigan had a run in with a deer that was supposedly dead. It happened while they were checking on some guy in a parked car outside a hotel. The man told the officers that he’d hit a deer earlier in the night . . . and that it was in the trunk of his car, so he could take it home and EAT it. When one of the cops went to look in the trunk, the deer jumped out, stumbled around, then ran off into the woods. There’s dashboard footage of it online. It doesn’t show what happened next, but the cops said the deer looked perfectly fine, and was probably just stunned.