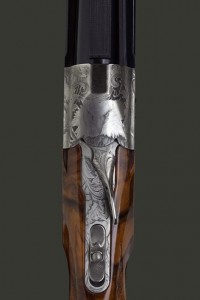 There are several disciplines of clay target sports played in the United States. The three most popular are trap, skeet, and sporting clays. Both trap and skeet have two different styles, American and International. The international standards are used in the world championships and the Olympics. We’ll look at them in future posts and compare them to the much more common American games.

There are 5 shooting stations on a trap field (see the diagram below) and a full squad consists of 5 individual shooters. A round of singles or handicap consists of 25 targets, while a round of doubles is 50 targets. In a round of trap the squad leader, number one shooter, calls for and fires at a target, 2 targets in doubles, then the next shooter does the same; this rotation continues until each shooter has fired at 5 targets. Then each shooter moves one station to the right the fifth shooter moves back to station one. The process is repeated until all shootershave fired at 25 targets. 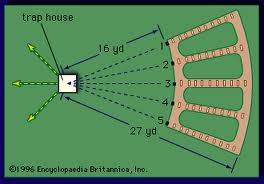 The shooting stations are positioned between 16 and 27 yards behind the trap. Both singles and doubles targets are shot from the 16 yard line, while handicap targets are shot from the 19 to 27 yard line. Singles and doubles participants are classified according to their averages, while yardage is earned in the handicap events by score and wins. We’ll take a more detailed look at each event in the coming weeks, as well as the specialty guns of trap shooting.

The photos I’ve included this week are of the Kreighoff “Eagle Gun.” This gun is an example of the exquisite engraving available for today’s custom guns. 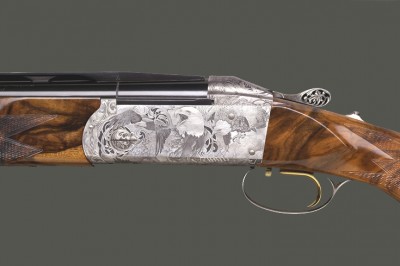 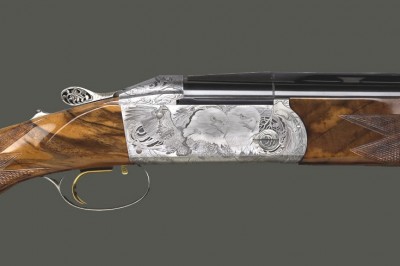