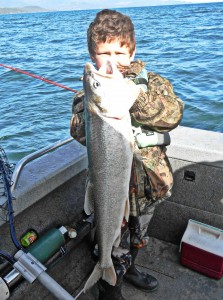 (Above photo: Matt Guckenberg Jr. of Kalispell with a lake trout that is almost as big as he is) (photo: Ryan Shima of Kalispell with a large lake trout)

Jason Mahlen of Kalispell , Spring Mack Days 1st place angler, caught his one thousandth fish on Friday and kept on fishing-one thousand one, one thousand two, one thousand three- until he reached one thousand fifty six for his ending total on Friday. He added twenty two fish on a very windy Saturday and forty seven on a windy Sunday to add up to one thousand one hundred twenty five lake trout entries, which puts him in a good position to break last year’s record of one thousand five hundred fifty one lake trout turned in by Don Beville of Lakeside. Mahlen also turned in a tagged fish worth $100 during the seventh weekend of the event. Jason’s fishing finesse has been witnessed by several anglers who are impressed by his lake trout fishing technique.

Weather has been relentless with wind and wave action hampering the anglers. Many believe that this has been the worst weather during the history of the events. Saturday was reported to be the worst ever with huge waves white capping across the lake. You have to know where to go to get out of that type of wave action to be able to hold anchor and fish throughout the storm. Even with all of the rough water and winds anglers have turned in a total of 17,890 so far in this event. That number compares with 21,963 in the 2012 Spring Event.

2013 Spring Mack Days are sponsored by the Confederated Salish and Kootenai Tribes and sanctioned by Montana Fish, Wildlife, and Parks and are used as a management tool to slowly reduce the non-native lake trout numbers in Flathead Lake. Up to $150,000 will be awarded to anglers on the last day of the event. Every lake trout entry gives anglers a chance to win in the lottery style drawing that begins at $1,000 and goes to $100. There are several other ways to win-smallest and largest lake trout entries, ladies, youth categories, captains’ prizes, weekend prizes, etc. For more information go to www.mackdays.com.

No one has turned in a high dollar tagged fish so far in the event. They are out there-one $10,000, five-$5,000, 10-$1,000 and over 4000 with values from $100-$500. The higher valued tagged fish were released in different sections of the lake one-two weeks before the event began. The tags are not visible. The adipose fin on the tagged fish has been clipped and those fish are scanned to read the tags.

Lady angler Susan Martin-Polson has a total of 170 to put her in first place. Second is Julie Vacca of Florence with 158, and Nicole Peters of Missoula is third with 127. Tracy Powers of Missoula-4th- has 55, 5th-Deana Knipe-Polson-45, and Donna Bolendar of Kalispell has 11 and is in sixth place.

Danner Shima-Kalispell leads in the 13-17 category with 219. Connor Kowalski of Florence follows with 150, Kobe Cox-Charlo is third with 117, 4th-Roger Guillory-Kalispell-106, and Tanner Murry-Columbia Falls has 101 and is in fifth. Garett Vaughan of Charlo is in first place in the 12 & under category with 281. Matt Guckenberg of Kalispell is second with 57, Cole Gilleard-Charlo-3rd with 32, Abby Hodgson-Kalispell-4th with 17, and Dylan Hodgson has 14.

Sunday May 5th will be the third day of the Heaviest Bucket of Fish Contest. Anglers must mark their four heaviest fish before coming in to enter for the day. Those four fish will be put in a bucket and a weight taken. Heaviest bucket of four fish will win $200. Overall winners of the combined three days of this contest will be announced May 19th at the awards.

Mack Days continues with fishing on Friday, Saturday, and Sunday the 8th weekend May 3rd, 4th, and 5th, and then beginning Friday May 10th there will be 10 straight fishing days until May 19th the last day of the event. The fish fry will begin at 4:00 at Blue Bay with awards at 5:00.