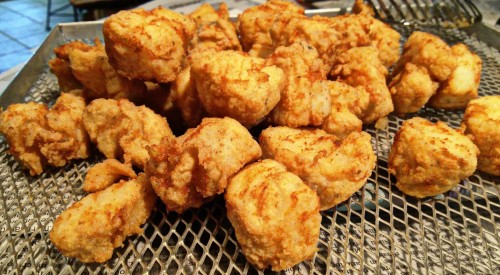 From Your Line to Your Plate: Deep-Fried Pike Nuggets
By angelamontana

Even though I am a newbie northern pike angler, I am looking forward to getting a big fat one this year! I found a recipe at fishcooking.about.com, and I thought it was a good recipe share, as I had no idea that northern pike have an extra set of bones that can make filleting them “tricky”. This will be some good information to have for when I get my first pike, as I don’t plan on getting just a “great” northern pike, but, rather, I plan on getting the “greatest” northern pike!

Check out the Deep-Fried Pike Nuggets recipe, with the first paragraph being commentary from Hank Shaw (he originally submitted the recipe), below:

I first tried this recipe years ago after my friend Chris and I caught a big northern pike through the ice in Minnesota. Pike have an extra set of bones that makes them tricky to fillet, so I got around that by chunking the meat and scoring the chunks across the extra bones, which breaks them into smaller pieces. The hot oil will help soften them enough to eat. Do this recipe with northerns smaller than 6 pounds.

Find the extra rib bones on your pike fillets, then with a sharp knife cut through them — do not cut the chunk in half. If you are good with a knife, cut a cross-hatch on the bone side; this breaks up the bone even more.

Salt the pike chunks and set aside.

Mix all the dry ingredients. Add enough salt so when you taste it, the mixture tastes a little salty.

Beat the eggs until frothy. Add the beer, mix, then add the dry ingredients. Mix well. The batter should be thick enough so that you can lay the chunks on top of it and they won’t immediately sink.

Heat peanut oil in a deep-fryer to 350 degrees.

Dip the pike chunks and shake off extra. Dip into the hot oil and fry until golden brown, about 5 minutes. Do this in small batches.

When done, place the fish on a paper towel on a platter and put in the oven to keep warm.

Serve with a series of sauces, such as hot sauce, aioli, and a Vietnamese dipping sauce. Oh yeah, and a cold beer!