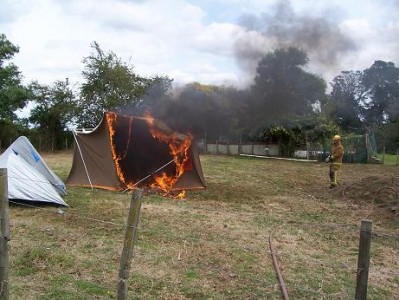 Camping is meant to be relaxing, even therapeutic. But for a couple out of Washington, a camping trip near the Canadian border went terribly wrong.

According to the Bellingham Herald

Jennifer Marie Sharp, 26, and her boyfriend were arguing about a past lover. After a while, Sharp demanded the car keys, but the boyfriend wouldn’t give them up because she had been drinking.

The 34-year-old boyfriend decided he didn’t want to argue anymore. So he went into a tent and tried to sleep it off.

About 10 p.m., Sharp soaked the tent in lighter fluid, then lit the door on fire. The tent took a lot of damage, but the boyfriend escaped without any serious burns.

When the boyfriend escaped the tent, Sharp attacked him with “pieces of firewood, and camp chairs, and cooking utensils, and various other things.”

Then she broke a car windshield and wandered off into the dark. Deputies picked her up as she was walking toward Highway 20. She was booked into Whatcom County Jail on investigation of arson in the first degree and domestic violence assault in the second degree.