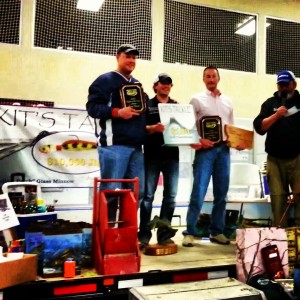 “Head East” by Trevor Johnson of Kit’s Tackle
By angelamontana

When I asked my friend Brian Rooney (Townsend Marine) if he was attending the State Walleye Banquet in Glasgow, MT his reply was “If I’m gunna drive that far out east there’s gunna be a boat behind my truck.” At this instant, even though excited for the banquet and to see all my Glasgow friends, my heart sank knowing I would be minutes from my beloved Fort Peck and not get to do some jiggin’. If this wasn’t hard enough to swallow, as we passed both the Gates of the Mountains and Nelson reservoir on the way, they were both glass calm and calling our names. Wiping the drool from our jowls and dreaming of fishing, dad and I kept on truckin’ until we arrived in Glasgow. One thing worth mention this time of year is the always astonishing beauty of the Rooster pheasant in his mating tuxedo. Always makes the drive more interesting…and remember, keep your windows cracked…you’re in the land of Montana’s state bird. Nothing, and I mean nothing, sings the lullaby of eastern Montana like the western meadowlark. The culprit himself taking a break from belting out his chorus. -photo courtesy of Trevor Johnson

Getting back to business, we checked into our room and headed for the Friday night social to meet with all our friends. I was very impressed with the amount of people that drove from all corners of the state to support the Glasgow walleye banquet. After seeing a million great people and getting a belly full of chow, dad and I settled in at a table with some great friends. As our pal Roger Twilliger would say “let me clue you” we had a darn good time. Stories went from turkey hunting to fishing to…let’s just say it got interesting.  We all had a little too much fun…if that’s possible!!

The next morning came early, and with a bit of stress since we had a HUGE day upon us. After dipping my head in the gas station coffee pot, I was ready to kick some adipose fin and get the party started!! Getting to the convention center, we only had a hair more than an hour to set up our entire booth. Running around like frightened baitfish, and with a little improvising, the Kit’s Tackle booth was up and running. And let’s just say in perfect time…HOLY COMOLEE the jigs were perceived well!! Our booth was so busy that dad and I didn’t even have time to eat lunch, let alone take a sip of Gatorade. We heard tons of awesome testimonials, gave out a boatload of tips, and sold A LOT of Glass Minnow Series jigs. With as many jigs that went out the door, let’s just say Fort Peck’s game fish are in BIG TROUBLE this year!!

It was almost overwhelming being amidst so many hardcore and dedicated walleye fishermen. I can tell you one thing, the eastern Montana girls and boys take their fishing seriously!! And we couldn’t be happier to be a part of their tackle box and get them “Jiggin’ the Dream” in 2013!! As the clock approached 1:00 pm, it was time for dad and me to hit the stage for our featured seminar. This was the first time we used microphones over a PA system in a seminar and other than a few technical difficulties it went pretty smooth.

It sure was nice that the Glasgow chapter let us do a seminar during the show so a BIG THANK YOU shout out to them!! After finishing up the seminar, our booth was like a beehive swarming with fishermen…it was AWESOME!! As the show wrapped up, we had to break down the entire booth we had just set up just a few short hours before. Phew…no rest for the wicked here folks. I felt more exhausted than a salmon making its river run from the ocean to its spawning ground.

Next was dinner, and a DAMN good dinner at that. Once again, the Glasgow folks can sure put on a heck of a banquet. It was very well organized, the food was AMAZING, and it was guaranteed to please. If you didn’t have fun at the 2013 state Walleye banquet I cannot recommend help for you After everyone was served, the live auction began and the Kit’s Tackle “Yellow Perch” themed rod was first up as the big ticket item!! Dad built an extraordinary SCV (St. Croix’s finest rod blank) that we donated to raise money for Glasgow chapter of Walleyes Unlimited. Not raising as much as our rods do at the western Montana Banquets, the rod still went for $475. Not only will winner be “Jiggin’ the Dream” but so will the local Glasgow kids with the money we help raise to promote the future of the sport and to get the little jiggers on the water!! Always feels good to help out such a good cause…I’m a sucker for kids and fishing. 🙂 As the banquet finally winded down, all I could do was think about sleep but I was in for a big surprise. My good friend, Ken Schmidt said “you’re not getting out of the banquet hall until you dance with my daughter.” Five hours later, EXHAUSTED and the sorest I have ever been, I crawled to my motel room. He didn’t clue me that it was a twelve year olds birthday party and they wanted to dance!! I have done some extreme stuff in my time, but I’m not sure if anything compares to dancing for hours on end with a dozen little girls. With that being said, this was the most fun I have had in years and probably better than jiggin’ on Fort Peck. I don’t think I stopped smiling for a second during my hall of fame dance party. So I want to give a big thanks to all the beautiful girls that showed me the moves on the dance floor till the wee hours of the night.

Waking up Sunday morning, having only enough energy to focus on getting home…it was going to be a long drive. Mother Nature decided to blanket the ground with snow and turn the roads to solid ice making driving conditions BRUTAL!! Arriving home safely, I conclude my Glasgow adventure as a wicked wild, balls to the wall, Sh*% Show of a weekend!! And one hell of a good time with AMAZING people!!