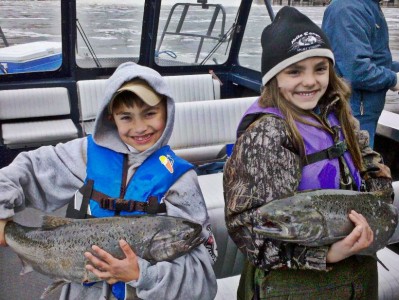 The following article was forwarded to the Montana Outdoor Radio Show courtesy of Tom Steinbrenner of Missoula, Montana:

SALMON FISHING — The Idaho Fish and Game Commission has canceled its meeting set for today to set spring chinook salmon seasons because too few fish have made it over Bonneville Dam to predict the run into Idaho.

I mentioned a couple weeks ago that the Idaho Department of Fish and Game Commission was scheduled to meet today to set the spring Chinook Salmon season and limits. Due to the low number of PIT-tagged fish that have passed over Bonneville Dam (as of April 21, 2013), we felt it was too early to project how many salmon would eventually make it to Idaho. As a result, this commission meeting was cancelled, and we will likely announce later this week when the commission will reconvene to set the salmon season and limits. I have provided the table (above) so you all can view the data we are working with that the will be used to estimate the number of fish that are destined for Idaho and eventually be used to set the Chinook salmon season and limits. I want you to focus on the last two columns of this table which summarizes how many fish would be available for harvest based on whether the run has an average timing or late timing. For a Idaho spring Chinook run that has an average timing, about 30% of the run should have passed over Bonneville Dam by now. If this run has an average timing, you can see that it will be very weak and we won’t even have enough fish coming to Idaho to meet brood needs. For an Idaho spring Chinook run that has a late timing, less than 15% of the run should have passed over Bonneville Dam by now which means there will be a lot more to come. If the run is late, we are projecting there would be enough to have a fishery across the Clearwater Region. So, as you can see, it didn’t make much sense for the Commission to meet when there is so much uncertainty with how many fish will actually make it to Idaho.

Let’s all hope that the run is late and there will be enough coming to Idaho to have a fishery.

Stay tuned for more info to come next week. An Idaho Fish and Game Commission teleconference to set 2013 salmon fishing seasons has been rescheduled for April 30.

(Click HERE for original link for the article above via spokesman.com)