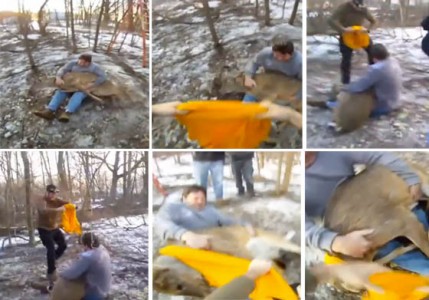 Everyone with a hunting license should know how to field dress a deer, but not everyone knows how to literally DRESS a deer. A group of men out of Wisconsin are in trouble for trapping a deer and dressing it in a t-shirt.

According to WTMJ in Wisconsin

In YouTube video posted just last week, men are seen setting an elaborate trap on what the Wisconsin Department of Natural Resources says is private land in Oak Creek.

The video shows a man carrying a T-shirt toward the trap. Laughter is heard as the man enters the enclosure with a deer already struggling. The laughter continues as the deer tries to get away, only to be wrestled to the ground.

The video is titled ‘how to put a T-shirt on a fiesty deer’. At least five men are involved. They used at least three video cameras to capture what they did, including one camera mounted on someone’s head.

The deer ran off and has since been spotted by several Oak Creek residents.