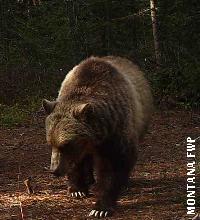 Pablo Man Attacked by Bear In His Yard
By OutdoorAly

A college student in Pablo was attacked by a bear in his yard earlier today. The man, a student at Salish Kootenai College, suffered injuries to his head and arms Friday after a bear attacked him, officials said.

Undersheriff Dan Yonkin said the man was in his yard, and got between a sow and her two cubs Friday morning.

Other reports from officials at the Confederated Salish and Kootenai Tribes said the student was hiking alone in a brushy area east of the college.

The bear charged, attacked the student and left the area, tribal officials said.

Authorities haven’t confirmed what kind of bear it was, but the man believed it was a grizzly. The Flathead Indian reservation is home to both black and grizzly bears.

Sheriff’s department spokeswoman Karen Sargeant said the man was hospitalized in Kalispell. His name was not released.

Join us in talking about Catchin the Big Ones today!