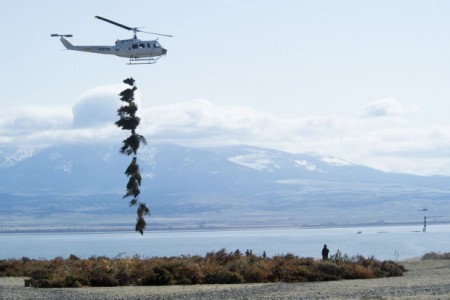 Perch Could Be Spawning In Your Christmas Tree
By OutdoorAly

As you are trimming the tree, wrapping presents, and celebrating Christmas, fishing is likely the last thing on your mind (unless you are the Captain). But, turns out that tree you just trimmed could end up a cozy home for yellow perch to spawn. Helena Record reported on a project that takes place every year called “Pines for Perch,” where Montana Fish, Wildlife and Parks drop around 3,500 Christmas trees into Canyon Ferry Reservoir to enhance Perch Habitat. Here is the story from by Eve Byron of the Independent Record:

HELENA — With a swoop and a splash, about 3,500 Christmas trees were dropped into Canyon Ferry Reservoir on Wednesday to enhance perch habitat.

Known as “Pines for Perch,” the trees create places for yellow perch to spawn, according to Adam Strainer with Montana Fish, Wildlife and Parks. Since the late 1990s, they’ve dropped about 75,000 trees into the reservoir.

“Throughout the years, we have identified through video that they’re using these structures to spawn,” Strainer said. “Last year we set out single trees that we marked with buoys, and identified perch using four out of ten. If you extrapolate for 3,500 trees, we’re creating quite a bit of good habitat.”

That’s necessary, Strainer said, because the yellow perch population is at historic lows. The drop in population has been caused mainly by predation from walleyes.

Strainer said the project went off without a hitch — kind of.

They fasten about 100 trees at a time to a long, quarter-inch-thick steel cable, and hitch that to a state Department of Natural Resources and Conservation helicopter. The DNRC crew whisks the trees skyward, takes them out over the water and drops them. Fifty-pound concrete blocks, which also are affixed to the cable, sink the trees.

Strainer said the DNRC crews use this as a training exercise, which simulates releasing buckets of water on wildfires.

He said the needles fall off the pines by the end of summer and the trees become silted in within a few years, as do the cables and the concrete blocks.

Pines for Perch is a cooperative effort among the city of Helena, the Gallatin, Madison and Upper Missouri Walleye Unlimited chapters, the DNRC, FWP and a variety of volunteers.

“We placed them about one mile offshore from the Silos,” Strainer said. “It’s a really good project for perch in Canyon Ferry Reservoir.”