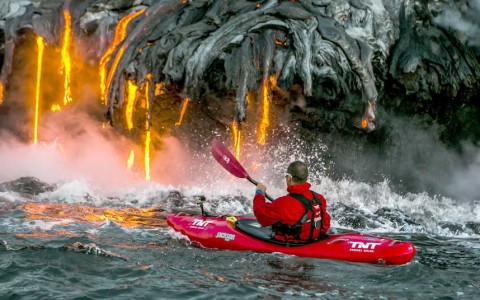 Kayakers are known for doing some extreme stunts, but paddling near an erupting volcano is crazy. A group of Kayakers, filming a show for a Brazilian TV show, were filmed paddling near an active volcano in Hawaii.

According to yahoo news

They chose Kilauea Volcano, which has been actively erupting since 1983 and is the most active of the five known volcanoes on the Big Island. Home to Pele, the Hawaiian volcano goddess, Kilauea, according to the Hawaiian Volcano Observatory, may even be the most active volcano in the world. Because of the ongoing lava flow, a landmass has been growing out of its base, some 40 miles beneath the ocean’s surface.

“Myself and my friends Ben Stookesberry and Chris Korbulic enter our kayaks to arrive as close as possible to the river of lava that is flowing from Kilauea,” Oliva said. “When I was closest to the lava, it was impossible to put your hand in the water because it was literally boiling and I would burn my hands.”