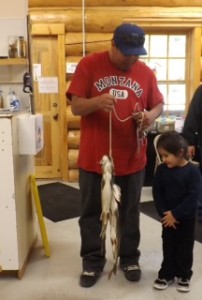 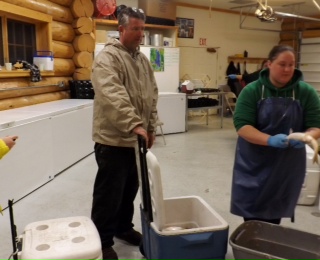 581-David McDaniel get lake trout counted in by Brittany Courville.

Anglers fishing in the Spring Mack Days Event turned in a total of 1,801 lake trout over the fifth weekend bringing the event total to 13,832. Unstable spring weather hampered the anglers over the weekend. Friday with 843 entries was calm until late afternoon when the wind began to blow. Saturday was very windy with snow squalls moving across the lake causing a mixing bowl of waves coming from every direction and very low visibility at times from snow blowing horizontally across the water. Entries for Saturday were totaled at 111. Sunday’s weather was calmer but there was 4” of snow on the ground at the Blue Bay Boat Ramp. The snow melted off by late afternoon but then the winds began again. A total of 847 lake trout were entered.

Jason Mahlen of Kalispell continues his lead in the event with a total of 846 lake trout entries. Jason turned in totals of 57-5-and 31 for the weekend. Steven Benson of Four Lakes, Wa. moved into second with 502 total entries-weekend days of 20, 12, and 45. Michael Benson of Lonepine is third with 499-weekend days of 31-13-and 45. Mike reached a milestone of turning in over 10,000 lake trout since he began fishing Mack Days in the 2006 Spring Event. His total for that event was 158 lake trout. Craig Morigeau of Polson moved into 4th with a total of 497 with 28 turned in on Sunday. .Fifth place is held by Scott Mahlen of Kalispell with 426 and weekend totals of 31 and 20. Sixth place Danny Smith of Hot Springs with 409. Smith turned in 64 on Friday and 70 on Sunday. Bryan Long of Columbia Falls-7th-358, Dean Vaughan of Charlo 8th with 340, 9th Darren Borgen of Columbia Falls, and 10th place is held by Jerry Benson of Plains with 279.

Mack Days are sponsored by the Confederated Salish and Kootenai Tribes and sanctioned by Montana Fish, Wildlife, and Parks. Mack Days are about making a difference. Helping to increase the numbers of native bull trout and westslope cutthroat trout that once were the dominate fish of the lake by reducing the non-native lake trout. Up to $150,000 in Cash and Prizes will be awarded at the conclusion of the event on May 19th.

Leading the ladies is Susan Martin of Polson with 111 followed by Nicole Peters of Missoula with 105, and Julie Vacca of Florence with 82.

Garett Vaughan of Charlo is first in the 12 & under age group with 234 followed by Matt Guckenberg –Kalispell with 46, Cole Gilleard of St. Ignatius with 31, Abby Hodgson-Kalispell-9, Dylan Hodgson-7, and Boone Gilleard-St. Ignatius-5. The 13-17 category has Danner Shima of Kalispell leading with 182, 2nd is Connor Kowalski-Florence-131, 3rd-Kobe Cox-Charlo-106, 4th Tanner Murry-Columbia Falls-101, and 5th-Brady Weible-Charlo-57.

There are seven hundred and sixty anglers entered in the event. Entries are taken up until the last day of the event. Go to www.mackdays.com for rules, entry form, information, and check out the new movie clips about lake trout fishing. Telephone 406-883-2888 ex. 7294 if you have questions.

We remind everyone to be safe, watch the weather reports, and have a safety plan in place. Let someone know where you are going and when you expect to return. Keep cell phones dry and wear your PFD on the water.
Fish On!