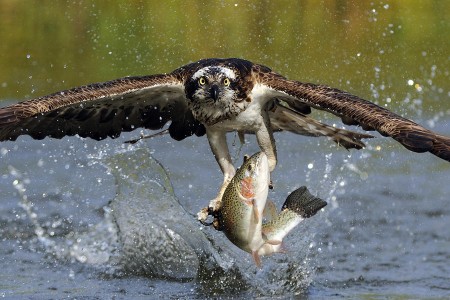 (Above photo by Scott Linstead)

My father has always been an avid fisherman.  As far back as I can remember he would take my little brother and me along on his escapades.  This time it was a weekend camping trip to Placid Lake.  From what he tells me, it was one of my grandfather’s fishing favorites.  Placid is not a big lake, but it’s a cold one, with lush evergreen forest butting right up to most of the lake’s edge.  At either end of the small water hole, the lake is full of lily pads and “sea weed”.  It makes for great cover and fairly good fishing. It is one of many smaller lakes in the Seeley-Swan basin, but none the less popular. During the summer months, hundreds flock to Placid Lake for all types of recreation from swimming to water skiing.  We always went for the fishing.

Can you remember how as a child the feelings you would get the night before a big holiday such as Christmas, or the day of Halloween?  For me, that’s what a camping trip with my father was like.  It was midsummer, I think in June.  We would take off on a Friday evening when my Dad would get off work.  We’d set up camp at the forest service camp site, and maybe get some fishing in, if not too late.  It was always to bed when the sun went down.  We would be up before the light the next morning.

It was a cold, fresh morning.  The birds all chirping and the sun just breaking the horizon as Danny, my brother and myself would watch our father launch the small aluminum boat of his fathers.  We were going trolling, a type of fishing when one casts a line out behind a slow moving craft and “troll” along.  Usually, the lure is a few hundred feet behind.  As we departed from shore, we all still had our jackets on, but soon that would not be the case.

As the day wore on, I remember how hot it was getting, even though it was not quite noon.  Sweat was beading up on my forehead and running down like rain.  It was like floating around in a big silver aluminum frying pan.  I was done with fishing.  I had caught a fist full of lily pads.  My dreams of a large lake trout or bass had all but vanished.  Not for my Dad or brother.  They were both close to getting their limit.

Every time that morning I would think I had something on the line it would become a disappointment.   And every time Danny or Pops would reel in, it would a be victory!  This was no strange feat when referring to my father’s fishing prowess.  He is just one of those guys you read about in books or see in a fishing movie.  He will catch a fish when no one else can.  But, then there was my brother, he was doing great and I was not.  This did not happen very often or at all up until this point as I remember it.  Dan and me are less than two years apart and have always been very competitive with each other.  So, you can see why I was less than happy.

I was hot, hungry, and tired of my little brother beating me out on the fish count.  As younger children do, I started to complain.  I wanted to head back in, get some lunch and relax in the shade for a bit.  My Dad succumbed to my complaints and said we would take one last sweep around and head to camp.  As we were about to round the inlet portion of the lake almost to the dock,  I got a bite.  I wasn’t fooled this time.  I left that seaweed out on the end of the line. I could imagine a giant clump of light green plants waving like hair in the wind attached to my lure.  I was fed up with false hits or “bites” to my rig.  It would stay out there until we headed in.

As the little silver craft came around the end of the lake, my Dad pointed out an osprey hovering over the water to the aft of the boat.  “I think it’s about to dive!”, exclaimed my father.  No sooner did the words come out of his mouth, the bird was falling straight at the green mountain lake.  It hit with a clashing splash.  What happened next was like a slow motion video in my mind’s eye.  As soon as the raptor took to the sky, my rod flashed to the side of the boat.  If not for the pole’s reel getting snared in between the starboard side and one of the bench seats, it would have been gone forever.  At first I was unsure of what was going on.

Then, my Dad yells out “The osprey has your fish.”  And indeed it did.  As the bird rose into the air, I attempted reel in my catch.  To the best man go the spoils maybe in this case bird or boy.  It was like one of those deep sea marlin fishing expeditions.  You know the one where the guy is strapped into a chair and has to lean way back to reel in the giant monster on the other end of his line.  That’s what this was like for me, adrenaline pumping though my veins my father and brother yelling at me to keep a hold of the pole.  It was exciting and nerve racking all at the same time.

As the seconds wore on, the osprey slowly moved from the back of the boat out to fifty degrees of the side.  The bird looked as though it was trying to fly sideways through the air, all the while pulling back as much as I could give.  “He” seemed relentless. After all, this may be life or death for him.  But, I would hold on to victory and my advisory would relinquish the trophy.

I spun that spinning reel as fast as my little fingers could handle.  When the fish was landed in the boat, it had the markings of a great fight.  Six large talon imprints on one side and two more down the other.  Amazingly, the fish was still alive.  Not for long, that went to dinner that evening.

It was one of those moments in time that slow down, but, for some, speed up.  I cannot tell you how long that fish hawk had a hold of my trout, but I think it was the best time I ever had fishing.  I have since been up there, and it has changed a lot.  It feels foreign.  Somehow, it’s not the same place of my youth.  Every road is paved; the camp sites are more like giant motor home parking spots.  It feels as if I’m in some kind of suburb and not out in the wilderness.

I will always remember the day on Placid Lake that I caught an osprey.