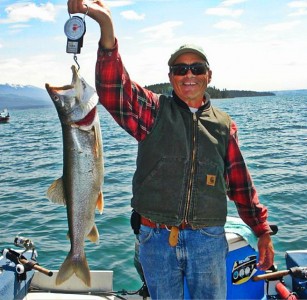 2013 Spring Mack Day anglers turned in a total of 3,169 lake trout over the eighth weekend of the event bringing the twenty four day total to 21,059. Jason Mahlen of Kalispell continues to lead the event with his total climbing to 1,297. Other experienced anglers say that he is awesome to watch-no tricks and no secrets-just good fishing techniques. Jason is on his game and having fun alongside his brother Scot and sometimes with a friend on board. Their boat hits the water a little after five in the morning and they spend up to fifteen hours constantly fishing no matter the weather and that is what it takes along with desire and determination to be on top or one of the top anglers in this event. He turned in weekend daily totals of 84, 47, and 41. Jason has an eighteen day average of 63.44. Second place is held by Mike Benson of Lonepine with 892 and average of 44.06, third place-Steven Benson of Four Lakes, Wa. with 778 and 38.0 average, fourth place-Craig Morigeau-Polson-747 and 40.67, fifth place-Scot Mahlen-Kalispell-695 and 35.06, sixth place-Danny Smith-Hot Springs-693-1 and 36.5, seventh place-Bryan Long with 548, 8th-Jerry Benson-Plains-517, 9th-Dean Vaughan-Charlo, and 10th-David McDaniel-Polson-489.

The third day of the Heaviest Bucket of Fish contest ($200) was won by Ted Peterson and Paul Gyles of Hamilton with a bucket of four lake trout that weighing an impressive 26.5lbs.. The second place bucket which were caught from shore by Julie Duncan of Polson and Kathleen Bell of Ronan had a weight of 22.1 lbs Final placing overall in the Heaviest Bucket of Fish were 1st-Duncan and Bell with 12 points winning $500. They had a four point day on 4/20 and an eight point day on 5/5. Second overall-$400- goes to Brandt Hammernick of Missoula with 10 points on 4/20. His total pounds, which is what is used to break a tie, came to 37.7lbs. Third place with 10 points on 5/5-$300 goes to Peterson and Gyles with 10 points and 26.5 lbs. The team of Terry Krogstad and Jim Bilodeau had 10 points and a weight of 16.6 lbs. on 3/29.

Mack Days are sponsored by the Confederated Salish and Kootenai Tribes and sanctioned by Montana Fish, Wildlife, and Parks. Up to $150,000 will be awarded on May 19th to anglers competing in the event which has been designed as a tool to slowly reduce non-native lake trout in Flathead Lake. A fish fry will begin at 4:00 and awards at 5:00 at the Blue Bay Campground for the anglers, friends, and families.

Garett Vaughan of Charlo has 314 to be the leader in the 12 & under category. 2nd place is held by Matt Guckenberg with 64, 3rd-Cole Gilleard-St. Ignatius-33, 4th-Abby Hodgson-Kalispell with 17, and 5th-Dylan Hodgson-14.