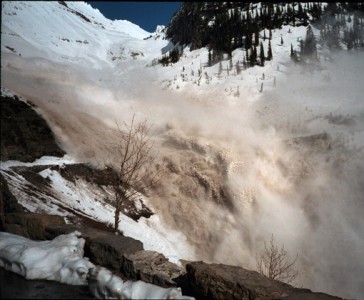 This photo was taken 10 years ago by Corwyn Wyman of Columbia Falls, who was riding his bike along a section of Going-To-Sun Road. He and Richard Garlough were biking on the road on April 23, 2003, when they stopped at Bird Woman Falls Overlook and he snapped this amazing photo.

Roads in Glacier are currently closed to vehicle traffic from Avalanche Lake to Jackson Glacier overlook. Bikes, and other non-vehicle traffic are allowed on that stretch, and visitors should be aware that extreme mother nature events such as this avalanche, can happen at any point along this still snow-laden part of road. For full road openings and updates click here.

The photo has drawn a lot of attention lately since it was used by Glacier National Park and Federal Highway Administration officials during their public presentations on the Sun Road reconstruction project where they used the photo as an example of extreme conditions the high alpine road undures.

Hungry Horse news originally published the photo with permission from Wyman in 2003, and recently republished it with the full story, which can be read here. Their readers have been curious if the photo is recent, and what the full story is. Here is what they explained:

Columbia Falls resident Corwyn Wyman, who took the picture, was biking up the Sun Road with Richard Garlough, also of Columbia Falls, on April 23, 2003, when they both stopped at Bird Woman Falls Overlook.

Park officials had erected a sign there closing the road to further travel by hikers and bikers because of the avalanche danger — which was a good thing. As Wyman and Garlough looked across the large gully toward Haystack Creek, two large slides came roaring down from the Garden Wall and formed one large avalanche as it swept across the Sun Road.

“It sounded like a jet engine,” Garlough said at the time.

The Hungry Horse News got permission from Wyman to use the photograph on the front page of the May 1, 2003, paper. It is truly a rare photograph. While many slides of this size occur along the Sun Road, it’s rare that a photographer would be standing there at the opportune time to snap the picture.