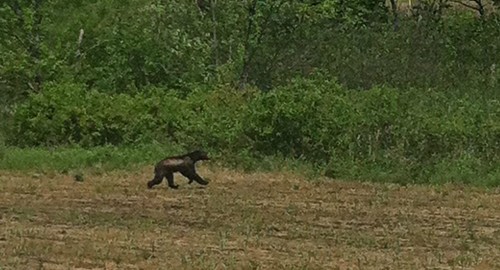 Black Bear Shot and Killed Near Forsyth
By angelamontana

FORSYTH, Mont.– A black bear that had been sighted several times since Sunday, including within the city limits of Forsyth was shot and killed Tuesday morning, May 21. The bear was killed a short distance northeast of Forsyth by a local rancher. The rancher believed the bear was threatening livestock. The male bear weighed 190 pounds and was probably searching for new territory.

Montana Fish, Wildlife and Parks biologists are seeing an increase in black bear activity in southeast Montana. Consequently FWP has increased fall black bear harvest quota. Sightings may become more frequent. Warden, Matt Hagedorn states, “ A bear cannot be shot simply because it is sighted near livestock, however, state law says people are not held to criminal liability for the taking of wildlife… if the wildlife is attacking, killing, or threatening to kill a person or livestock.”

FWP urges people who live in areas frequented by bears to make their properties unattractive to bears. Bears that find nothing to eat are likely to move elsewhere.

To keep from attracting bears, people should:

· Keep all garbage indoors or in a bear proof container.
· Thoroughly clean barbecue grills and move them indoors when they are not in use.
· Take down songbird feeders.
· Store horse and pet food in a secure shed. Never leave pet food out overnight.
· Pick up and dispose of rotting fruit or vegetables left from last year’s trees and gardens.