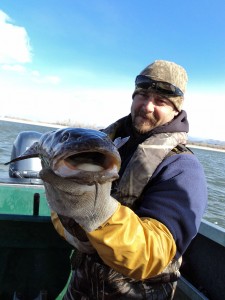 The 2013 Canyon Ferry Reservoir walleye spawning survey officially came to a close on May 8th. The survey was marked by many tough days battling traps in extreme weather, which meant many days of setting and resetting traps. FWP crews tagged 338 walleye this spring, down from 448 in 2012, with fish averaging 14.9-inches. There were 24 females (7%) sampled, with the largest at 24.6-inches and 6.5-pounds.

Over half of the ‘new’ walleye were captured from April 26th to 28th (55%), just after the full moon period, and another large portion of the catch occurred in April during an early warming trend. Considering how many days traps were pushed to shore to avoid weather, we captured quite a few walleye. Ten total northern pike were sampled in 2013 which averaged 38.4-inches and 17.4-pounds.

Please contact me if you have any question or are interested in volunteering at any time during the summer months. Thanks.