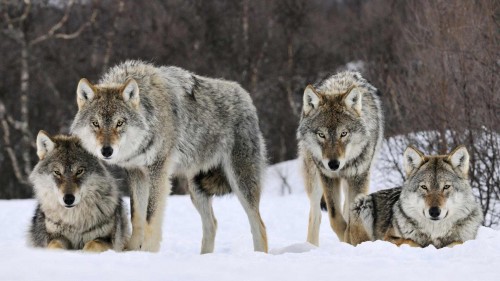 The Montana’s Fish, Wildlife & Parks Commission is seeking public comment on changes for the 2013-14 wolf hunting and trapping seasons.

Hunting and trapping of wolves is provided for in Montana’s wolf conservation and management plan. Over the course of Montana’s 2012-13 wolf seasons, hunters harvested 128 wolves and trappers took 97 wolves.

The overall bag limit for the upcoming seasons would be five wolves per person in any combination of wolves taken by hunting or trapping.

Wolf quotas would be maintained in areas near national parks, with a quota of seven wolves in an expanded Wolf Management Unit 316 near Yellowstone National Park and a quota of two wolves in WMU 110 near Glacier National Park.

Also proposed for the 2013-14 seasons is a regulation that would allow hunters to take a wolf over bait placed for trapping and a requirement that trappers in most of Montana would be required to set pan tensions to 10 pounds to minimize the unintentional trapping of lynx, wolverines and other nontargeted species.

The complete wolf hunting and trapping season proposals, and opportunities to comment and submit public comments, are available on the FWP website. To comment, and to find more details on the proposed changes beginning May 13, visit FWP’s website at fwp.mt.gov. Click “Hunting.” Comments are due by June 24 at 5 PM. Comments can be mailed to FWP – Wildlife Bureau, Attn: Public Comment; P.O. Box 200701; Helena, MT 59620-0701.

In Montana, officials estimate that at least 625 wolves, in 147 verified packs, and 37 breeding pairs inhabited the state at the end of 2012.

Delisting allows Montana to manage wolves in a manner similar to how bears, mountain lions and other wildlife species are managed, guided completely by state management plans and laws.