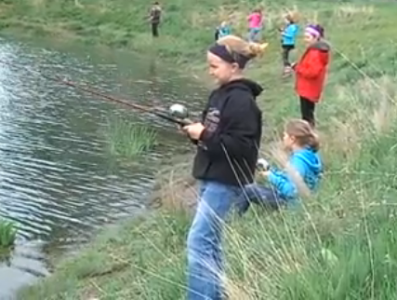 Usually when kids play hooky from school it doesn’t actually involve a hook. More than 100 fourth graders went down to Pine Grove Pond off of Rose Crossing near Kalispell to go fishing earlier this week. And those who weren’t baiting hooks and reeling em’ in, were learning about fish at the Creston hatchery.

The outing was part of the “Hooked on Fishing-Not On Drugs” program developed by the Future Fisherman Foundation, and a local version is implemented by Montana Fish Wildlife and Parks. The program works to educated students and began in three Montana classrooms in 1996. HOF is currently conducted in nearly 200 classrooms involving approximately 2,500 students annually.

The local FWP uses Pine Grove Pond  and the Creston hatchery to educated students about fishing, the environment, and hopefully teach them to use fishing as an outlet instead of drugs. Pine Grove Pond is a 5 acre pond located 3 miles northeast of Kalispell. It opened to the public April 30, 2011 and stocks mostly rainbow and cutthroat trout. Its primarily a family fishing pond open to everyone. Adults 15 and older are asked to release all fish and anglers 14 and younger may keep one tour per day. The pond is heavily used for Hooked On Fishing and other educational events.