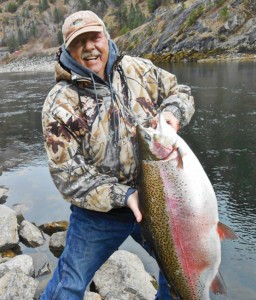 According to an article recently posted at idahostatejournal.com, Richard Galloway, of Idaho, caught a huge rainbow trout and released it, which is required by law, earlier this year in March.  Unfortunately for Galloway, protocol was not followed in recording numbers for this possible state record rainbow, so he forfeited his title.

The article quoted Galloway saying, “I think I had it on my line for 15 to 20 minutes. I was using 15-pound test, so I kind of horsed it in a little.  I thought it was a steelhead.”

Galloway estimates that the monster was somewhere around 36 inches long and 28 inches around, but he wasn’t sure of the weight.  The current state record for the largest rainbow trout in Idaho is currently held by Michelle Larsen-Williams (pictured below), with a 20 pound, 2 ounce rainbow caught back in July of 2009. 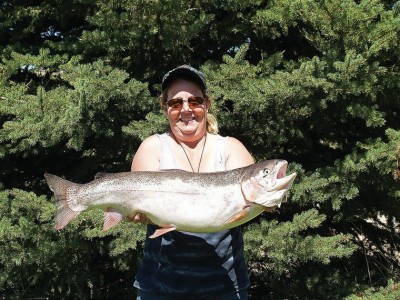 Reading about the catch and release of Galloway’s rainbow makes a person think twice about following protocol in the future.  Be sure to know your state’s requirements for recording potential record fish!