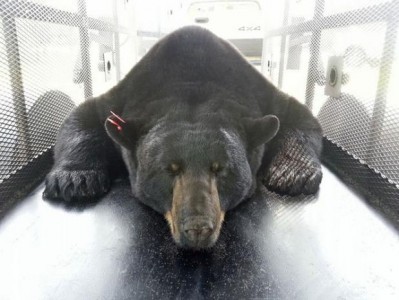 Record Black Bear Weighs in at 620 Pounds!
By angelamontana

You may have heard of the story of the big beastly black bear that ended up breaking the Florida state record as the largest bear ever found alive in the state.  A bigger boar was discovered a while back, with his weight being 624 pounds, but he was dead when he was discovered.

According to a story posted on the Orlando Sentinel’s website, Rural Lake County residents had been reporting sightings of a “colossal four-footed creature” that became known as “the region’s most prolific dumpster diver”.

Last Thursday, a 620-pound black bear became a Florida state record after it was trapped by officials in the Paisley neighborhood.  It is officially the largest bear to be found alive in Florida’s recorded history.

The article quoted Joy Hill, spokeswoman for FWC, saying that “The victims secured the trash cans inside a shed to trick the bear but, he proved too clever — or, too hungry.  He yanked the aluminium siding off the shed with his big bear paws and got his meal.”

After he was trapped, sedated, tagged and tattooed, the big boar was then released into another area of the Ocala National Forest.

Watch the footage of the bear being released into the wild, by wesh.com, HERE.