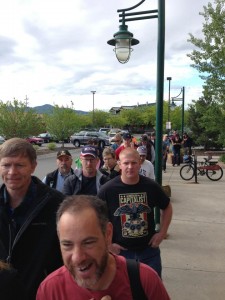 If you didn’t really believe there was an ammunition shortage, this picture captured by our Montana Outdoor Radio listener Mike Sparr, speaks a thousand words.

Every Friday morning he stands in line with about 100 other outdoor enthusiast waiting to buy ammunition from Wholesale Sports Outdoor Outfitters. With ammunition being sold from shelves faster than it can be restocked, the store came up with a way to attempt an even and fair distribution of highly  sought after ammunition: Sell it one day a week, limit the amount each person can purchase, keep the prices fair, first come first serve. If you shop around for ammunition like Mike does, you get to know who has what, and for how much all around Missoula. Here is the lowdown from Mike:

Axmen is selling 500 .22 for nearly $50 and Sportsman’s sells every Friday until sold out at $21.99. Wal-Mart’s shelves are almost always completely empty. Some people are selling online, I’m sure as most are hoarding, and prices shot up. 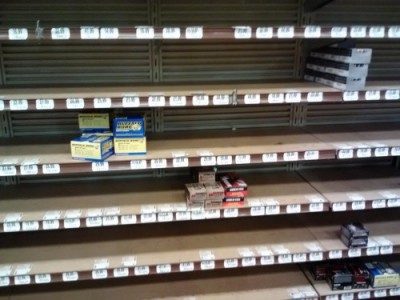 So, demand for ammunition is up, why aren’t prices? Every economics textbook would go against this idea. NPR recently did an article on this conundrum. They believe that when prices go up consumers want to know why, what is the retailers motive. If they are just trying to take advantage of consumers, they will likely lose business for being greedy. However, people are willing to pay almost triple the price online. Apparently consumers don’t hold the same standards for online sales.

There is at least one place where classical market forces seem to be in effect here: Some people have been buying ammo at low cost and selling it at a higher price online. Essentially, they’re scalping bullets. Scalpers don’t care about return customers. And their customers don’t expect them to be fair.

To read the rest of this story click here.