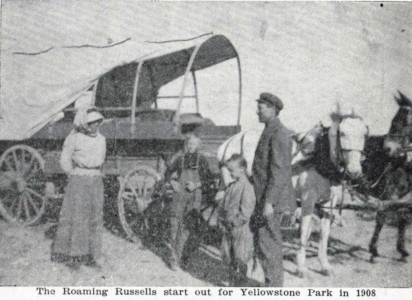 Let’s admit it. Camping has gotten pretty cushy over the years. We now have huge RVs and trailers with pop-out sides that feature everything from microwave ovens to big screen televisions. So image what it must have been like to visit Yellowstone National Park in the early 1900s.

To get a better idea, you can read the story I wrote in Monday’s Billings Gazette about Blanche Nichols Russell, a pioneer schoolmarm who recorded her journeys from western Nebraska to Yellowstone National Park. The first trip she made with her husband and two children was in 1908. They loaded up a covered wagon, complete with a mattress in the wagon bed, and drove the 500 miles to the park, pulled by mules.

Along the way they would shoot rabbits, catch fish and even have a dinner of bull snake to supplement the goods they bought at stores along the way. What’s neat is that even today, more than 100 years later, Russell would still recognize Yellowstone National Park and all of its features because they remain largely the same.

(This post was written by Brett French, Outdoors Editor for the Billings Gazette)