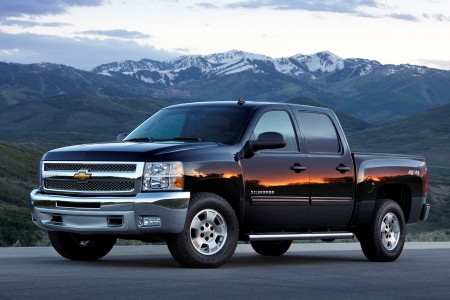 Are you in the market for a new truck, but you don’t want to lose any beefiness?  Well, according to the following article, written by Justin Houston, Chevies are where you should start!

See how Houston believes you can keep your ride macho without losing functionality:

What we drive is as much of an extension of our personalities as the clothes we wear, the politicians we vote for and the stores we shop in. And, let’s face it, guys: We care more than our wives and kids do about what our cars say about us.

Here are a few Man Vehicles, starting with the a couple from the 2013 Chevy lineup, that can double as a taxi for the kids yet still be macho rides.

2013 Chevrolet Silverado K15 4WD — It gets 18 mpg on the highway, which for a four-wheel drive truck, is pretty decent. It has four doors, so there is plenty of room for the kids in the back. If you add a cap on the back, your camping gear won’t get wet in the rain. Remove the cap and your kid taxi transforms into a work truck with enough space to haul employees around.

2013 Chevrolet Express 1500 2WD Passenger — This is more for the father who needs to haul around tools or tow a boat or camper, but it still has plenty of room for the kids. While it gets the poorest gas mileage of everything on the list at 13 mpg on the highway, it is highly versatile and comfortable. Remove the last row of seats when you need to haul things other than people.

2013 Ford F150 Raptor Pickup 4WD — Ford’s Baja crusher isn’t great on gas, at 16 mpg highway, but it is cool. Its aggressive stance, big tires and sophisticated suspension make is as good off-road as it is on. Available with four doors, it can also haul the kids around.

2013 GMC Sierra 15 Hybrid 4WD — The Sierra beats out both Chevy and Ford for fuel mileage, getting 23 mpg on the highway. This is also a great double-duty truck, with plenty of room for the kids in the four-door model, and plenty of get-up-and-go for towing or work.

2013 Honda Ridgeline Truck 4WD — Honda’s pickup straddles the line of toughness and functionality. It gets 21 mpg on the highway in four-wheel drive. This truck also has four doors, making it super easy to add car seats or to use it for work, towing or other heavy-duty “dad stuff,” even though the bed is a bit shorter than the domestics.

2013 Nissan Titan 4WD — At only 17 mpg on the highway, the Titan is down at the bottom end with Ford as far as fuel mileage. But with its four doors and decent size bed, it makes a great truck for towing, working and as a kid taxi.

2013 Lexus RX 450h — The luxury SUV beats out most others on this list, but it is a hybrid and is not four-wheel drive. That doesn’t mean it’s not versatile, though. At 28 mpg, you can go far, fit the kids in the back and have room in the rear of this SUV to haul fishing gear, camping gear or tools.

2013 Ford Explorer AWD FFV — The Explorer is perfect for those families who insist on a flex fuel vehicle. While running on regular fuel, the Ford Explorer gets 23 mpg on the highway; however, if you use E85, the fuel mileage drops to 17 mpg on the highway. With plenty of room in the back for the family, this all-wheel-drive vehicle will take you anywhere you need to go.

2013 Mazda 5 — The crossover gets an impressive 28 mpg on the highway and is perfect for hauling kids to school functions or for taking the entire family on a long trip. Dads also have space in the rear to store camping gear, fishing gear or tools if they need to use the vehicle for work.

*all MPG stats are courtesy of www.fueleconomy.gov.