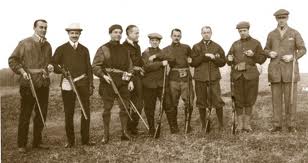 “The Sport Alluring”- With Colonel Smoothbore
By OutdoorAly

The early days of trapshooting were dominated by a couple of outstanding shooters. Captain Adam Henry Bogardus, he is the fellow who invented the Bogardus trap machine in 1877, literally romanticized the sport with his shooting prowess. Bogardus was a world champion and the United States Champion Trap Shootist.  Bogardus, along with his sons, toured with Buffalo Bill and Annie Oakley in the Wild West Show. This helped spread Bogardus’ fame, not only in the US, but worldwide. William Frank “Doc” Carver was six years junior to Bogardus but every bit as great a shooter. Bogardus and Carver set about a series of trapshooting matches around the country with Carver winning 19 of those contests and cementing himself as a World and American Champion Shootist. 1924 found the ATA building a permanent home in Vandalia, OH, a Dayton suburb. In 1999, the 100th Grand American Tournament was held under the leadership of my friend, Montana’s Gene Clawson, Jr. who was the ATA president at the time.