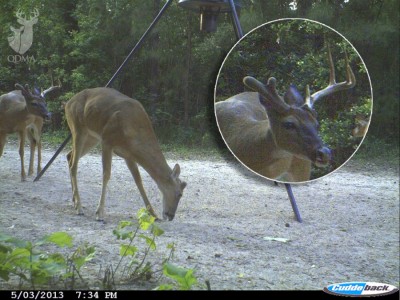 Unusual Buck Sheds Only One Antler
By angelamontana

Texas landowner and hunter, Keither Corley, left his trail cams up all winter and through the spring this year to “watch the progress of antler shedding and regrowth while also keeping an eye on feral hog numbers”, according to an article recently posted on qdma.com.  After reviewing the pictures on his camera, Corley discovered something bizarre.  One of the bucks he caught on film hadn’t shed one of his antlers as of one week ago, May 3rd!  He already had the one he did shed growing back in velvet.

It turns out this is a fairly rare condition called Doppelkpf, which is German for “double set”.  The article states that it is rare in whitetails, but is “documented in numerous species of deer”.

Apparently, there was an article posted back in 2004 in an issue of Quality Whitetails that told a story of a buck resident of the Deer Lab at the University of Georgia with the same condition.  The deer developed the Doppelkopf antler on one side after “sustaining a series of head injuries”.

It seems that if a buck shows signs of a Doppelkopf antler, then that means something in the normal cycle of the drop in testosterone, which triggers the antlers to shed, is failing.

“Abnormal or failed antler casting has been reported in association with the maintenance of high testosterone levels after the breeding season, damage to nerves involved in antler growth, and nutritional stress,” wrote the authors of the QW article, including David Osborn and Dr. Karl V. Miller of UGA and antler-growth expert Dr. George Bubenik of the University of Guelph in Ontario.

NuNu suffered a series of head and antler injuries in 2001 and 2002. In 2004, the buck’s antlers were sawed off for safety reasons as they were each year, but the right antler stub never shed normally. As you can see in the photos in the Gallery below, the new antler growth grew around and enveloped the old antler, but of course the new growth did not form normally. During the process, researchers actually tried to gently dislodge the old antler stump before new growth began, but it was solidly fixed to the pedicle. NuNu went on to produce a normal left antler and an abnormal right antler. Interestingly, he shed both sides completely the following winter, including the old antler stump, but for the rest of his life his right antler grew with an abnormal spiral assumed to be the result of permanent nerve damage to the pedicle.

Keith Corley is keeping the folks at the qdma.com updated on the happenings of this unusual whitetail.  If you would like to follow the progress, click HERE for original article and more information on the Quality Deer Management Association. 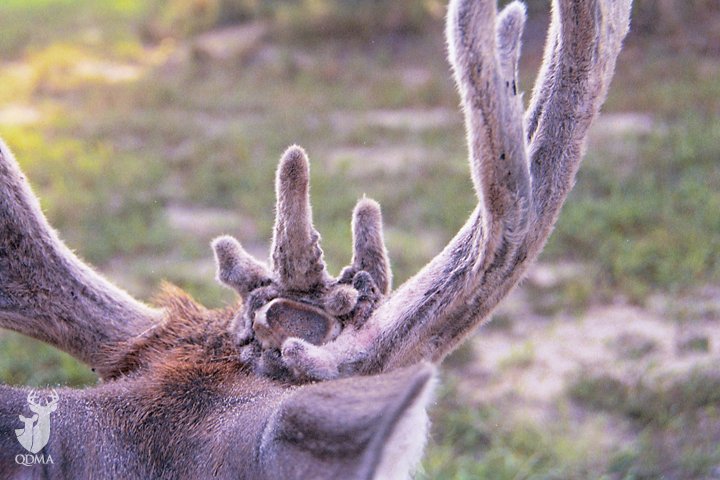