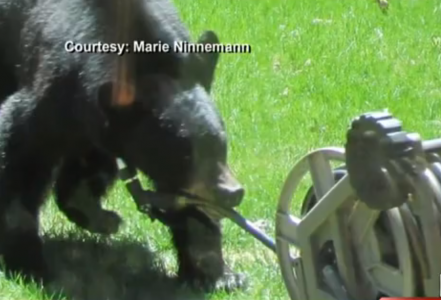 Woman Beats Black Bear Off Husband With Shotgun
By OutdoorAly

She had the right weapon, but not the right skills to use it. After a black bear went after their family dog at a remote cabin in Wisconsin, Gerre Ninnemann was the next bears victim. His wife was left to try and defend him. She went to the basement and grabbed a shotgun. But she wasn’t quite sure how to load or shoot it, so instead started clubbing the bear over the head with the gun.

The young bear had chased down her dog, and when her husband stepped out to call the dog in, the bear took him down. The bear bit his neck and back, and  while he was trying to escape was tackled again just feet from the front door. The few blows Marie Ninneman planted on the bears head with her shotgun were enough to detract the bear allow her husband and her  and dog Maddie to retreat back into their cabin. They then called the cops, and a deputy shot the bear after he ran towards his car.