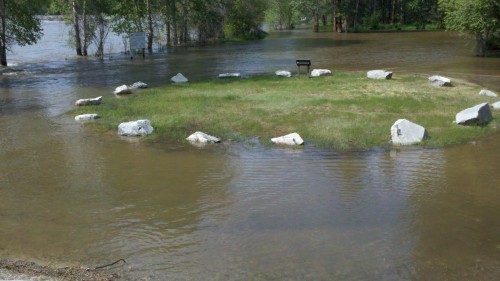 We are so sad to report this news. A 6-year-old-girl died on a boating accident on the Bitterroot River Sunday just below Woodside Crossing. The boat was reported to have capsized after going over an irrigation diversion. The Bitterroot is a notoriously deceitful river full of hidden snags, sweepers and strainers that lie just below the surface. Many times with water at high levels, a man overboard is most often a body recovery, not rescue. Please be careful out there! Here is the full story as reported by the Missoulian:

The drift boat that she was riding in capsized in the hydraulic step below a diversion dam between the Woodside and Tucker fishing access sites.

The girl and others in the group ended up in the water and several, including the victim, were caught in the strong currents behind the dam, said Ravalli County Sheriff Chris Hoffman.

Emergency crews were dispatched at 2:46 p.m.

When they arrived, CPR was already being performed on the girl on a gravel bar downstream from the diversion dam, Hoffman said.

The girl was transported via Life Flight to St. Patrick Hospital in Missoula, where she died. Her name was not released.

There were no other injuries reported.

Officials are strongly advising boaters who float this stretch or the river to portage around the dam and not attempt to float over it. The diversion dam is a hazard for boats. Signs are posted upriver that urge caution and portage.

The river has been migrating toward the east for the past couple of years. FWP officials posted signs at the juncture two years ago to warn people of the danger.

Due to changes in the water’s flow this year, the west channel of this stretch of river no longer has enough water for boat travel. All floaters downstream of Woodside FAS must travel in the channel containing the diversion dam.

“People need to take the time to stop and look at them,” Hoffman said. “This river is more dangerous than it looks.”