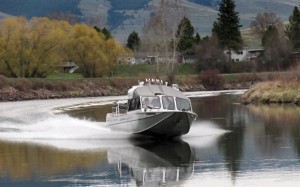 Jet Boats On The Clark Fork, Another Controversy In Sharing Public Space
By OutdoorAly

Missoula has long been one of the more liberal towns in Montana. For every hunter, there is an animal rights advocate, for every dirt bike trail, there are hikers pushing to close them, for every snowmobile, there are cross-country skiers “fed up with the noise”.

The latest battle in shared use of public space is jet boats on the Clark Fork. Motorized watercraft, except personal watercraft, are permitted from May 1 to June 15.  But even that small window has drawn opposition from other river users. There has even been a website put up posting information on all the reasons motor boats should not be allowed on the river at all.

Back in 2011 the Missoulian reported on the issue when the FWP received so many complaints that they cancelled the plans for a concrete boat ramp at Harpers:

The issue reached a boiling point last summer, when the agency got so many objections to powerboat use on the Clark Fork, it dropped plans for a new concrete boat ramp at the Harper’s Bridge fishing access site west of Missoula.

“It was brought to us largely as a social concern,” Saffel said. “The wildlife and natural resource impacts are plausible, but likely minimal. On other hand, we got lots of input from the public that socially and safety-wise, it’s an issue.”

Motorized boat owners using this stretch of river feel that the complaints are unmerited and the opponents arguments that jet boats cause danger to other river users such as tubers and rafters is not logical. They note that the river is too high for tubers to safely float that time of year, and other non-motorized river traffic during the time is also minimal in that section of the Clark Fork. The time of year when the water is high enough for jet boats to be on the river is not usually a good time for anglers either. Here is one comment on a forum thread jet boat advocates started.

We’ve been made aware of this action by a neighbor, otherwise much might happen without formal notice. We have clear view of the Clark Fork River from our home and are cognizant about the level of traffic from jet boats and jet skis. And based on that, we cannot see any reason to propose regulations. That is to say, the traffic is light, the traffic has not been any sort of problem, and the traffic is limited already by the low water that happens much of the season.

For the few that use the river during high water times, we see no problem and have stated that to the FWP who asks for comments by 6/27/2011.

The shared section of river continues to create tension on both sides of the issue. For now the river is open on the sections indicated in purple on the map below for just one more week this spring.