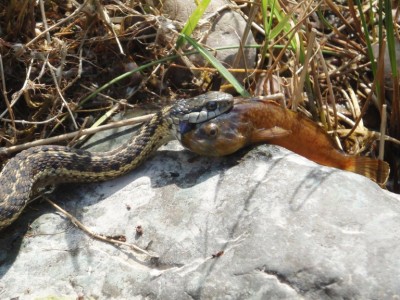 Snakes are apparently aware of the benefits of Omega 3 oils that result from adding fish to your diet.  The snake pictured above seemingly had no worries of a mercury overdose, either!

According to a post on ecosnake.com, Allan, of Worden’s Market in Missoula, was out fishing Monture Creek, near the Blackfoot River, during the summer of 2008 when he came across the gluttonous reptile.  When Allan arrived at the scene, and the fish was still alive, so the snake must have just caught it.  The author of the post points out how sad the fish looks, as it must have known what was in store in the near future.

According to Allan, the fish was swallowed by the snake a “short while later”.

I bet that was a pretty cool scene to randomly come across and also have the opportunity to get a picture of it!

If you have had any bizarre animal encounters while out fishing, let us know!  Send us a Facebook message at www.facebook.com/montanaoutdoor or email your story to angela@montanaoutdoor.com.