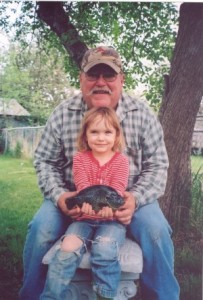 So many anglers would love to have their name in the record books for catching the largest of any type of fish, and Bette Schmieding, of Billings, was no exception.

According to an article in the Billings Gazette, the three year-old was fishing in May of 2009 with her grandfather at Hickson’s Pond, near Acton, using worms as bait.  Well, she got a bite–a Montana state record bite!