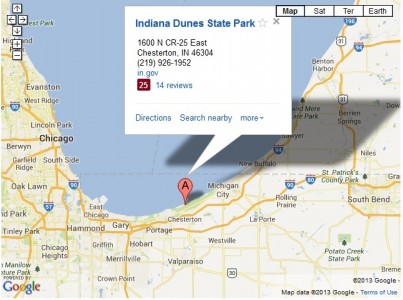 One day, there is a murky oil substance on the shore of one of the United States’ greatest lakes, and the next day, it’s gone!  That is exactly what happened at Lake Michigan’s Porter Beach at Indiana Dunes National Lakeshore last month!

An article on the Mother Nature Network’s website (mnn.com) revealed that swimmers at Porter Beach were “covered in an oily substance and there was a silver sheen on the lake” last month.  It was gone without a trace by the next day.

Dan Goldblatt, a spokesman for the Department of Environmental Management, stated that preliminary tests indicate the slippery sludge consisted of D-gluconic acid, a mild acid used to clean metals, and tricalcium orthophosphate, an additive found in food and fertilizers.

But, where did it come from? The beach was checked the next day, and there was no evidence of the mystery sludge.  Even with the initial reports minimizing any toxic danger, they don’t know enough about the substance–or even where it went–to make a final determination.  Although, scientists did examine the water samples to see if water organisms were dying as a result of exposure to the substance, and it turned out that none of the local water organisms were affected.

The article also stated “the Coast Guard’s safety marine unit in Chicago has reviewed a week’s worth of video showing vessels in the Port of Indiana, but have not seen anything spilling from the ships, according to Petty Officer 3rd Class Christopher Yaw.”

As of today, the source of the substance remains unknown and beachgoers and scientists are still perplexed as to where the substance originated and where it went.  Keep an eye out in Montana lakes and rivers for a mystery slime, because if it is something that is showing up nationwide, it will be worth reporting!

Check out the news report from NBC Chicago: