Bear Euthanized After Breaking into Tents
By angelamontana 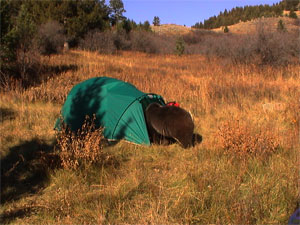 BILLINGS — A black bear that apparently lost its fear of people was euthanized last week after it broke into two occupied tents at a Forest Service campground south of Red Lodge.

Campers at the Sheridan Campground reported that a bear ripped through a pop-up tent trailer and a backpacking tent in the early morning hours of Saturday July 13. Both were occupied but none of the campers was injured.

The incidents were reported July 15, at which time U.S. Forest Service officials closed the campground to accommodate a bear trap. Montana Fish, Wildlife and Parks biologists caught a black bear that fit the description of the troublesome animal July 16.

Because the bear was habituated to people and likely to return to the campground, it was euthanized for the safety of people in the area.

The campground has since reopened only to hard-sided campers.

FWP wildlife biologist Shawn Stewart said he heard reports of a black bear rummaging around cabins south of Red Lodge this summer. Bears can become habituated to humans if they find food around cabins, campgrounds or vehicles.

Black bears and grizzly bears live throughout south central Montana. If they encounter unsecured garbage, dog food, bird feeders, barbecue grills or other food sources, the bears will return and could become habituated to people. If bears lose their fear of people, it almost always is fatal for the bear.

FWP is advising cabin owners to bear-proof their property by removing anything that looks or smells like food. That includes cleaning up and locking up garbage and garbage cans, cleaning and storing barbecue grills, emptying birdfeeders, storing pet food and livestock feed supplements inside and regularly cleaning up around gardens and fruit trees.

Campers should adhere to backcountry bear-safety protocols, which call for storing anything that smells like food – including dishes and clothing used during cooking – in secured vehicles, bear-proof containers or away from tents.