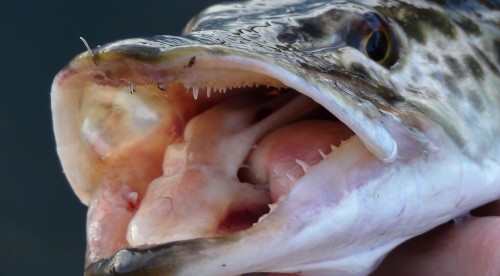 Major repairs on the dam at Cow Creek Reservoir near the Bears Paw Mountains south of Chinook have been completed, and the reservoir has been refilled and stocked with more fish.

The 85-acre water body is located on private property within the Sand Creek Ranch. Public fishing access to the reservoir and a section of Cow Creek above the reservoir has been renewed through a new 20-year agreement between the ranch owners and the Montana Department of Fish, Wildlife & Parks, said FWP Havre-area biologist Cody Nagel and FWP warden Andy Fuerst.

Incorporated in this agreement are stipulations that the ranch owners agree to not divert water for irrigation from Cow Creek Reservoir, which will allow the water body to be managed to maximize the benefits to its popular fishery.

The dam has long needed major maintenance as years of wave action and ice severely eroded the face and prevented the reservoir from being held at full pool. That situation also adversely impacted stream flows above and below the impoundment.

The restoration — funded through a $75,000 FWP Future Fisheries Improvement Program grant and nearly $100,000 of in-kind donations from the owners — included re-sloping, re-shaping and raising the crest of the dam, reinforcing the spillway area, and placing protective layers of fabric and rip-rap on the dam face. The restoration work was completed last November, and the reservoir was refilled earlier this summer.

Tiger muskellunge, which can grow to great lengths and weights, are a cross between a muskellunge and a northern pike. Following the repairs, Nagel and Fuerst said the reservoir was stocked with 4,000 additional adult yellow perch and 50 fingerling tiger muskies. Tiger muskies have been periodically stocked in Cow Creek Reservoir since 1997.

Cow Creek upstream of the reservoir supports a high-quality brook trout fishery, as well as native white suckers and longnose dace. Nagel and Fuerst said these species will all benefit from restoring and maintaining flow in Cow Creek between the existing irrigation diversion and Cow Creek Reservoir.