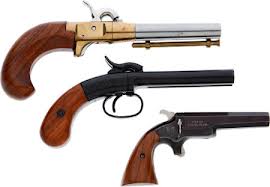 History of the Handgun
By OutdoorAly

As we noted last week, handguns really became one of the dominant weapons for mankind in the 17th century. Wheellocks and flintlocks were followed by the percussion muzzle-loading pistol. In 1814, Elisha Collier of Boston invented a flintlock revolver. This was a huge step forward in gun design as it offered the shooter multiple shots without having to reload. Collier’s single action gun was also unique in that it was self-priming. Each time the hammer was cocked, powder was automatically released into the flash pan from a storage compartment.

The first percussion cap revolver was invented by Samuel Colt in 1836. The Colt Patterson model changed the handgun world forever. It was simpler to use and much more reliable than previous handguns and Colt Manufacturing continues to produce great firearms today. In 1856, Horace Smith and Daniel Wesson produced the first self-contained cartridge revolver, the Volcanic pistol. The Volcanic Repeating Arms Company didn’t last very long and was forced into insolvency by one of its investors, shirt maker Oliver Winchester. Winchester renamed the company The New Haven Arms Company, and in 1866 good old Ollie again reorganized the company and renamed it The Winchester Repeating Arms Company. Horace Smith and Daniel Wesson teamed up again to form the Smith & Wesson Revolver Company. While they have had numerous owners over the years, both companies are in business today and still produce great firearms. Olin owns the rights to the Winchester name and licenses it to FNH. Smith & Wesson is a publically traded company that also owns Thompson/Center Arms. 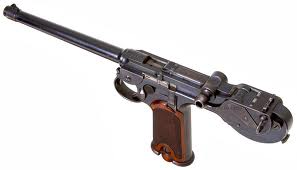 Revolvers became the standard handgun for the last half of the 19th century and the early 20th century. In 1893, Hugo Borchardt designed the first commercially successful semi-auto pistol, the C-93. This gun used a recoil operated toggle link somewhat akin to the Hiram Maxim designed recoil operated machine gun. The semi-auto pistol was born and their various models now number in the thousands.

Next week we will begin a more detailed look at handguns with a study of the venerable single action revolver.