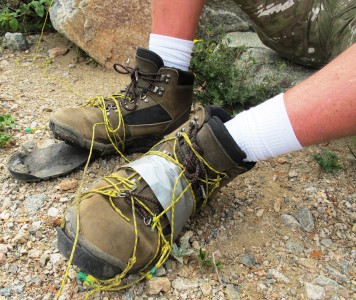 Northern pike fishing has been good at Tongue River Reservoir this past week, according to folks at the marina. Fish up to 10 pounds have been taken. The pike are biting on bottom bouncers with worm harnesses. Most are being taken by walleye anglers.

News of the northern bite comes just as the Yellowstone River is clearing up from a huge mud slug that hit over the Fourth of July week. But there was a report of a mudslide on Highway 89 north of Gardiner on Wednesday that could lead to more muddy waters. If not, the river and its tributaries should be getting near prime time for hopper and dropper fishing. Anglers will want to fish early in the day, since temperatures for the Billings area are predicted to be in the 90s for the next five days.

If you want to avoid the heat, try hiking in to one of the many high mountain lakes. A trip up to Mystic and Island lakes in the Beartooth Mountains last weekend was so cool that a jacket was required, hard to believe considering the heat baking the valley. Luckily, Billings had a few cool days this week that should slow any warming of the rivers by a few days.

While in the mountains, I came across an unlucky Belgrade backpacker who was trying to lace the soles of his boots back to the uppers. He said the bottoms had fallen off as he and a friend approached Granite Peak for an attempted climb. Granite is the tallest mountain in Montana. Needless to say, they had to turn back and he was having a tough time hiking with the shredded boots. His advice: always carry an extra pair of shoes when backpacking.

For more on outdoor news in the Billings area, check out The Billings Gazette’s Outdoors page at http://billingsgazette.com/lifestyles/recreation/.